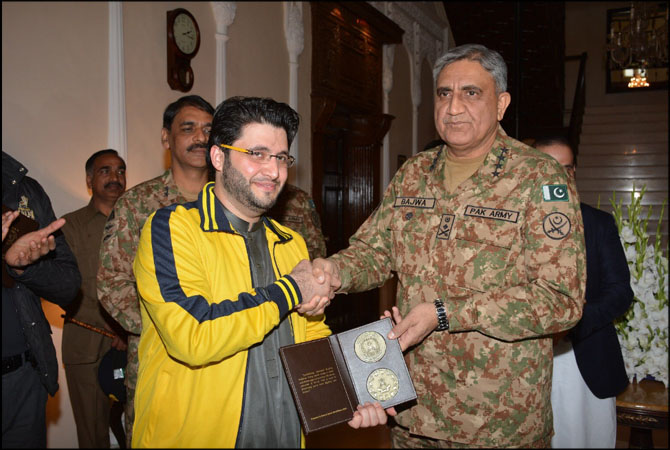 RAWALPINDI, 11 March: Chief of Army Staff (COAS) General Qamar Javed Bajwa on Saturday met with the players and management of Peshawar Zalmi and congratulated them on their performance and success in the Pakistan Super League.
The Army Chief welcomed PSL 2017 champions Peshawar Zalmi at the General Headquarters. He appreciated the efforts by the PSL organizers to bring cricket back to Pakistan. He said that Pakistan is a peace loving country. He made a special mention and thanked the foreign players and guests who came to Pakistan. “Cricket is the most favorite game and binding force for the nation,” he said. He advised players to continue excelling and bringing good name to their country.
Peshawar Zalmi’s players were pleasantly surprised to know the Army Chief’s attachment with cricket, his cricketing expertise and knowledge about cricket records.
They thanked the Army Chief for his support and for his tips and advice. They assured them to support Pakistan Army in promoting peace and national harmony. They acknowledged the sacrifices of the Pakistan Army in bringing peace and stability in the country.