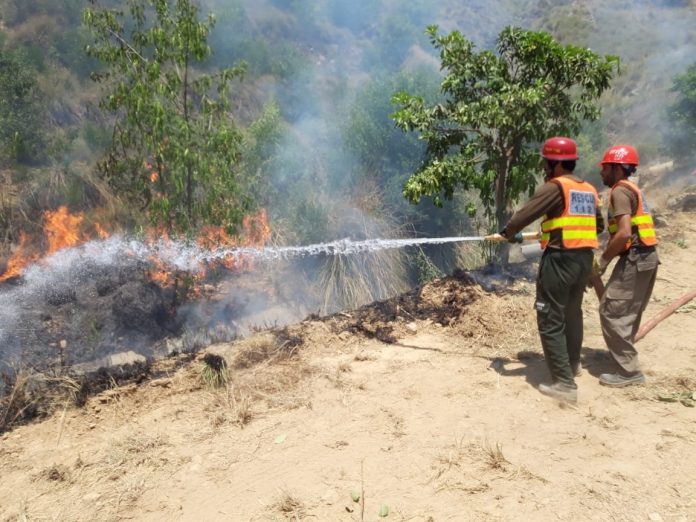 PESHAWAR: Wildfire has engulfed the Karamar mountain top from the last two days and now spread over a large area due to the strong winds, dried bushes and hot weather conditions.

On Friday, nine helicopters of Pakistan Army also participated in efforts to extinguish the fire. The director General Rescue 1122, Dr Khatir Ahmad informed that fire on Karamar mountain near Cadet College has been extinguished and they are now planning to control it on another side of the mountain to stop its further progress.

“It is dry grass, bush and hard work against step mountain side considerable distance away from road and firefighting equipment. The KP rescue 1122 staff from three districts is on it with Director General overseeing it personally,” said Abid Majeed, the provincial secretary relief and rehabilitation on twitter. Majeed added that the commissioner and district administration officials are also present on the spot to prepare a plan to put out the bush fire.

The KP Government has earlier requested for choppers and Pakistan army agreed to help the administration and provide aerial water spray. But there was s a strong wind blowing at the top, feeding the fire in the presence of dried brush due to extreme weather. The strong winds are also making it difficult for the helicopter to reach the spot and extinguish the fire on time.

It was almost impossible for the workers to have control over the bush fire because no water can reach the mountain top. There is huge government machinery present in the area but due to the mountainous region, it couldn’t reach the top.

Director General of Rescue-1122 Dr Khatir himself supervised the efforts. The provincial secretary Environment and forests Nazar Hussain was also arrived on the spot after travelling on food for almost four kilometres.