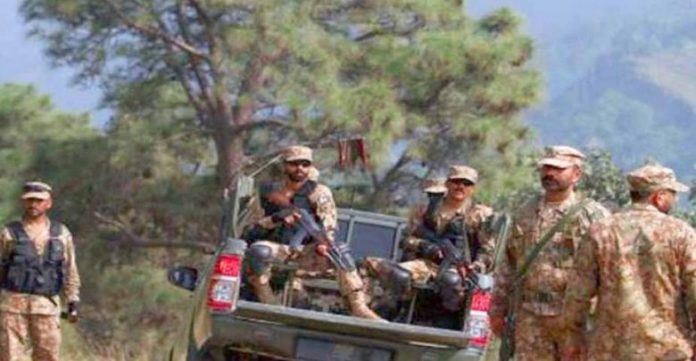 PESHAWAR: A soldier was martyred when unknown militants opened fire on a security post in Datta Khel area of North Waziristan.  Simultaneously, a bomb went off near the Bomb Disposal Unit in Bajaur, Ghakhi area in Salarzai Tehsil, as a result, a paramilitary soldier was injured in the explosion, officials said to media.

While providing details of the attack, the official added that unknown persons opened firing on Shin Kandai Check post in Data Khel, as a result, a paramilitary soldier, Mujahid Khan embraced Sharafat. Security forces have transported the dead body through helicopter to Miranshah, headquarter of the tribal district. After the attack, security forces cordoned off the area and conducted a search operation.

Similarly, in another incident of violence, a Bajaur Scouts men injured in Improvised Explosive Device (IED) blast in Ghakhi area of district Bajaur. The injured soldier was identified as Irfan Bangash, who has Has been taken to District Headquarter Hospital Khar in critical condition. After the attack, security forces cordoned off the areas and launched a search operation to arrest the militants

Attacks in security forces have increased in tribal districts especially in North Waziristan. Where on April 27, three Levies martyred, while another sustained injuries in a blast at a check post in Malik Shahi area in Shewa tehsil. It was informed that a powerful blast happened at the check post as soon as the Levies personnel reached there. Two Levies personnel died on the spot; while two others were injured. The Injured personnel were immediately shifted to hospital, where another personnel succumbed to his injuries.