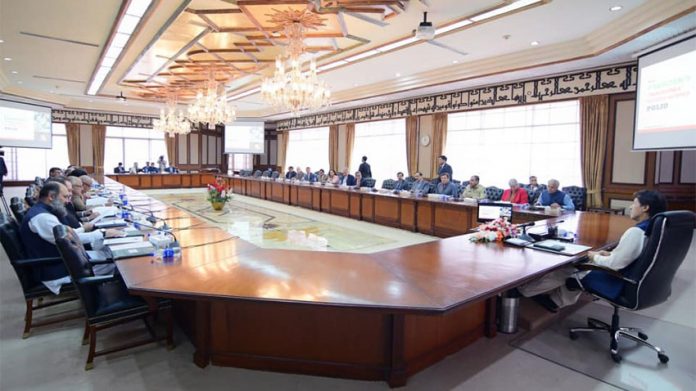 PESHAWAR: The Pakistan Army has assured the government to provide full support to polio vaccination teams in their efforts to reach out to the children in far flung areas of the country.

The assurance was made a high-level meeting chaired by Prime Minister Imran Khan in Islamabad on Wednesday. Deputy Director Polio Bill and Melinda Gates Dr Tim Peterson also presented a letter of appreciation from Bill Gates to Prime Minister Imran Kahn for the efforts being made to eliminate the crippling disease. In the letter, Bill Gates thanked the prime minister for calling the meeting on polio eradication. He said it is necessary to remove misconceptions about polio vaccination from the minds of the parents. Representatives of international partners and donors also assured their continued cooperation to the government of Pakistan in polio eradication mission.

Imran Khan said eradication of the crippling disease is the top most priority of the government as it affects the future generation. He expressed concern over the recent spike in polio cases. He directed the relevant authorities in the federal and provincial governments to undertake effective immunisation and awareness campaigns to check the incidence of polio and ensure provision of polio vaccine to every child. He emphasised the need for a robust partnership between Ehsaas and polio eradication programmes for synergised implementation of the two vital programmes.

Khyber Pakhtunkhwa Chief Minister Mehmood Khan and Balochistan Chief Minister Jam Kamal and the chief secretaries of Punjab and Sindh informed the meeting about measures taken for polio eradication in their provinces.

PM’s Focal Person on Polio Eradication Babar Bin Atta briefed the meeting about the report of International Monitoring Board for the year 2017-18 identifying loopholes in the strategy at that time which led to recent spike of polio cases in some parts of country, especially Bannu division. He said a new strategy has been made which is based on four new pillars including shift from push to pull, from disease control to eradication, ownership at the highest level and ensuring complete accountability at the operational level.

Thirty-two polio cases have surfaced in Pakistan this year out of which 26 were reported in KP.