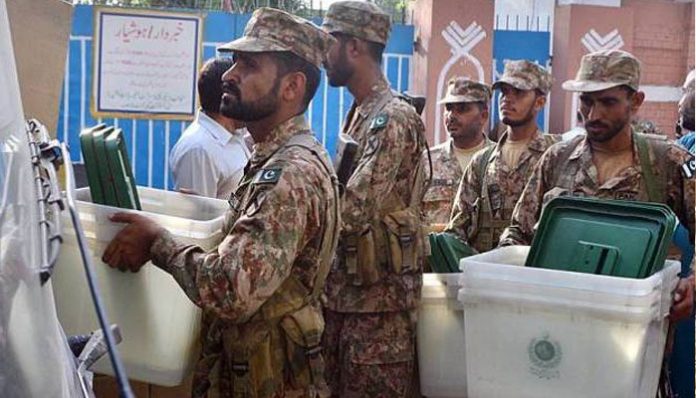 PESHAWAR: The Election Commission of Pakistan (ECP) has handed over the responsibility of security for the upcoming elections in tribal districts on Khyber Pakhtunkhwa Assembly seats to the Pakistan Army.

According to the Election Commission, the polls on 16 general seats of tribal districts in KP Assembly will be held under the security cover by the Pakistan Army. The Army personnel will be deployed inside and outside all polling stations in the merged districts. The electoral body has directed the Pakistan Army to make arrangements in this regard.

The ECP says the panting of ballot papers, transportation and compilation of results will be carried out under the security cover of Pakistan Army. The deployment of Army in the polls was inevitable amid challenging security circumstances in tribal districts ahead of the crucial polls.

Elections on 16 general seats of Khyber Pakhtunkhwa Assembly for merged districts were originally scheduled on July 2, but the exercise was delayed to July 20 by the Election Commission after receiving an application from the KP government in this regard. The KP government had said in the application that polls should be delayed due to security and administrative issues.

Besides the ban on posting and transfers of government officials, no government functionary or elected representative including a local government functionary has been allowed to announce any development scheme for the constituencies, where the election is under is scheduled on July 20. The ECP has so far issued show cause notices to Prime Minister Imran Khan, KP Tourism Minister Atif Khan and MNA from Khyber tribal district Iqbal Afridi over allegedly violating the election code of conduct in tribal districts.