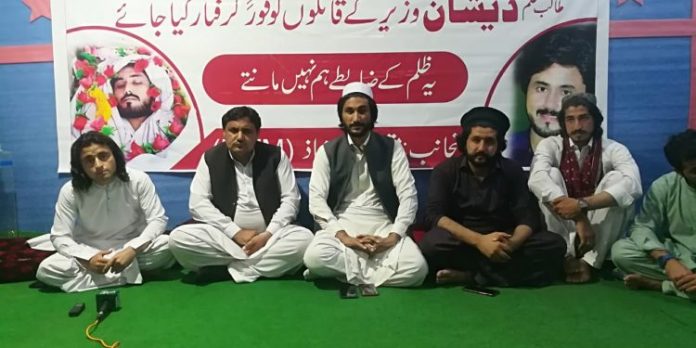 BANNU: The Muttahida Tulaba Mahaz, a students’ union, has demanded arrest of the killers of Zeeshan, a student from Waziristan who was killed in Peshawar.

The students body office-holders including Safeer Janan, Rehan Pashtun, Khanzullah and political activists Niaz Advocate, Nadeem Askar and Hanif Pashtoon said while addressing a press conference at Bannu Press Club on Thursday that the engineering student Zeeshan was killed just for a mobile phone in Peshawar. They demanded the government to arrest the killers of the student and provide justice to his family. The Talaba Mahaz leaders said they will initiate protests in the educational institutions if the killers of Zeeshan were not arrested.

Twenty-one-year-old Zeeshan was a second-semester student of mechanical engineering at Iqra University and he was living in a private hostel situated at Iqra Road in Peshawar. On 22 April, he went out of hostel for some need, when two armed men on a motorcycle snatched his mobile phone. Zeeshan offered resistance during the robbery attempt due to which the robbers opened fire on him due to which he died on the spot. The assailants escaped from the scene after committing the murder just for a mobile phone.

The students in Peshawar are very concerned over the incident and frequent happening of street crimes which sometimes result into casualties.

One person lost his life and two others were injured in a car accident in Mardan on Thursday.

Rescue 1122 said a car overturned due to over speeding at Swat Expressway near Katlang. One person, Zubair, died in the accident, while two others, Bilal and Mashooq, were injured. The dead and injured belong to Shewa Adda area of Swabi.

The body was taken to Katlang Category-D Hospital, while the injured were shifted to Mardan Medical Complex.

Like most of the traffic accidents in Khyber Pakhtunkhwa, Thursday’s accident also happened due to reckless driving.