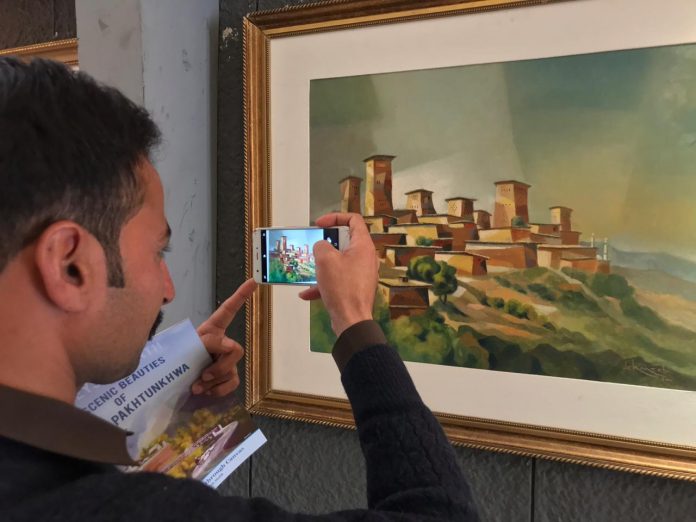 Organized by Directorate of Culture Khyber Pakhtunkhwa to promote the natural beauty of the province, The paintings collection is simple but attractive due to their interesting colour schemes.

The landscapes highlight the scenic valleys and its natural beauty, the eternal light of peace and tranquillity which the KP government believes can be used to attract foreign tourists to the province. As the government believe that his paintings are a perfect collection of KP’s culture and tourism that will engage the people with their culture and recognize the importance of art and culture as the engine of growth.

A delegation of Chinese Tourists also visited the hall to have a look at the paintings.

Besides the depiction of scenic valleys, the painting also highlights the historical Peshawar, known as the walled city of Peshawar with 16 gates around it. Its double-story old houses constructed with wooden frames, bricks, the limestone and mud structure.

“The Sharp and effective images that he has produced on canvas are reflective of the rich scenic beauty of Khyber Pakhtunkhwa,” said senior minister for culture, tourism, archaeology and sports, Muhammad Atif Khan who inaugurated the event along with councillor general Afghanistan and directorate general Khana Farhang, Iran. Khan appreciated the efforts of the artist.

The minister while talking about the restoration of Khyber Safari train said that it is a very expensive project that will cost some Rs 1 billion but they are determined to restore it as across  the border in India, they have declared such a line as national heritage.

The culture minister said that there will be more  such exhibitions to portray the beauty of the province and promote the artists. The minister said that his department has planned the establishment of an art gallery in Nishtar Hall and cultural centres at every district.