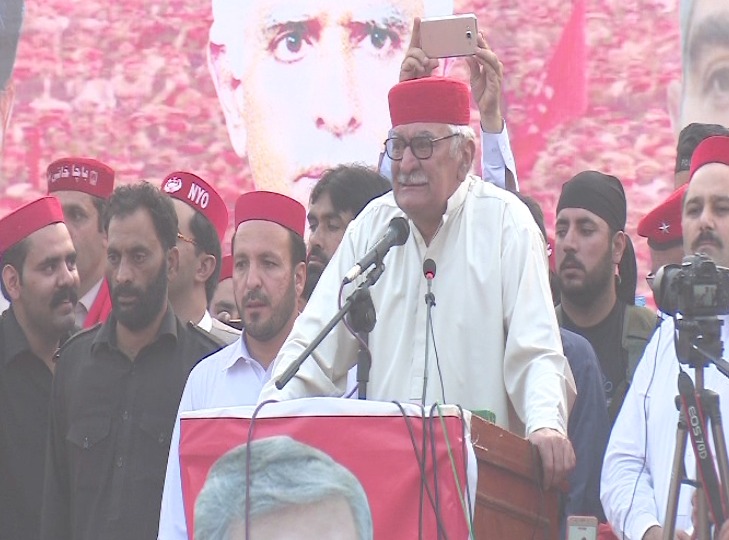 PESHAWAR, 22 October: Awami National Party chief Asfandyar Wali Khan on Sunday said he would not give up his struggle till Federally Administered Tribal Areas were merged in Khyber Pakhtunkhwa.

The ANP chief said that ousted prime minister Nawaz Sharif had forgotten his promises regarding reforms in the neglected tribal areas.

Addressing a public gathering here he said that believed in only one Pakhtunkhwa as he never accepted North and South Pakhtunkhwa.

He also came down hard upon Pakistan Tehreek-e-Insaf chief Imran Khan and said that the so-called champion of change has his eyes on Islamabad.

He claimed KP was never Imran Khan’s priority rather he was struggling to secure Islamabad. He also criticized Pakistan Muslim League leader Amir Muqam and said that he has been distributing transformers in NA-4 ahead of by-polls which was tantamount to pre-poll rigging.

He said that the Election Commission of Pakistan should take notice of this issue. Meanwhile, Pakistan People’s Party Chairman  Bilawal Bhutto Zardari also addressed a gathering and criticized PML-N and PTI for its flawed policies.

“Doctors and teachers have been protesting, the provincial government was facing corruption scandals like the Bank of Khyber while PTI was talking of turning everything upside down,” he said.

He said that PTI and PML-N have polluted politics and claimed that PPP would win the by-poll in NA-4.