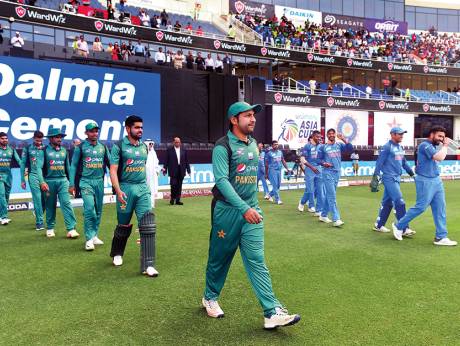 This was the second defeat of Pakistan against India in the Asia Cup tournament. Pacer Muhammad Aamir continued his wicket-less streak after conceding 41 runs.

Skipper Rohit Sharma who scored 111* remained unbeaten in the match, was dropped by Imam-ul-Haq and Fakhar Zaman.

India opener Shikhar Dhawan ran out after scoring 114 runs off 100 balls including 16 boundaries and two sixes on the strike rate of 114.

Shoaib Malik was the only batsman which offered a resistance by providing a much-needed stability to the team by contributing 78 runs as back-to-back wickets halted Pakistan from building early momentum after opting to bat. Indian team chased 238 run-target in 39.3 overs

Pakistan, earlier in the same tournament, lost against the subcontinent neighbours by eight wickets. The Pakistan batting order crumbled with the entire team returning to the pavilion after scoring just 162.