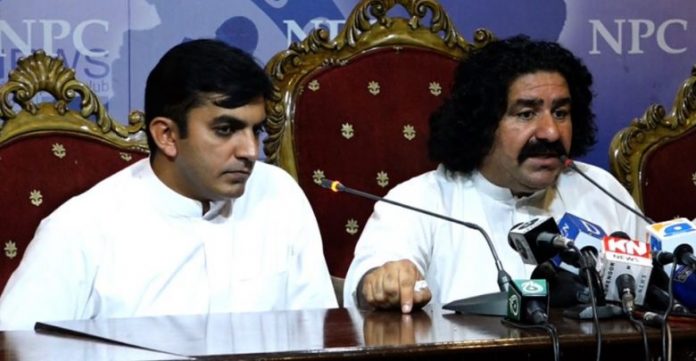 PESHAWAR: An Anti-Terrorism Court (ATC) on Saturday accepted bail applications of Members National Assembly Ali Wazir and Mohsin Dawar in a case pertaining attack on security forces however their bail was rejected in Khar Kamar tragedy.

The case was heard by ATC Judge in Bannu on Saturday. According to their lawyer, their bail applications were accepted in case, pertaining attack on the security forces in North Waziristan. The attack was carried out on security forces on 7th June in Tehsil Data Khel.

Lawyers of Ali Wazir and Mohsin Dawar informed the media that they will now file bail applications for both the Pakhtun Tahaffuz Movement leaders (PTM), in Khar Kamar tragedy, in the Peshawar High Court and expressed the hope that the court will grant them bail without further delay.

The security forces have accused both the MNAs for luring the public to attack a check post. The authorities furthered that they have videos evidence available that a security check post was attacked and the two MNAs were present on the occasion.

After their arrests, an application has also been filed in asking the Election Commission of Pakistan (ECP) to immediately impose a ban on their entry into parliament as well as restrain them from participating in active politics of the country.

Dawar has been elected as MNA from NA-48 while Ali Wazir from NA-50 of North Waziristan as independent candidates during the July 25, 2018, general elections. Since the arrests, speaker of the national assembly has not issued even a single production order for both the MNAs to attend the assembly proceedings despite repeated requests by opposition parties’ leaders.