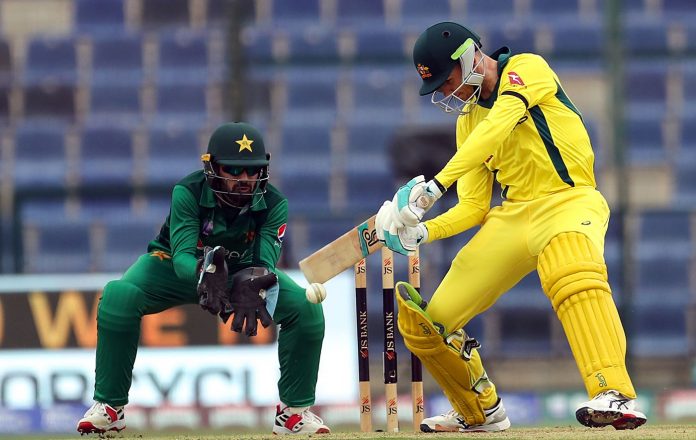 PESHAWAR: As was widely expected, Australia defeated Pakistan easily in the third match of the five-match one-day international (ODI) series in Abu Dhabi by 80 runs on Wednesday.

On a sporting track, Australia won the toss and decided to bat first and posted 266  runs for the loss of six wickets. Again captain Aeron Finch was the pick of batsmen for Australia has he scored 90 runs, while Glenn Maxwell scored quick 71 runs to take the team to a good total. Handscomb also batted well for his 47.

For Pakistan, Usman Shinwari, Haris Sohail, Yasir Shah, Junaid Khan and Imad Wasim took one wicket each. Mohammad Hasnain, who was included in the team after impressive performances in PSL-4, went for plenty and he may find it hard to make cut for the World Cup squad.

Pakistan were in disarray in the chase and they folded for 186 runs in the 45th over, conceding a heavy defeat and lost the series 3-0. Imam-ul-Haq was top scorer for Pakistan with 46 runs, while Imad Wasim scored 43.

Cummins was declared player of the match for his brilliant bowling.

Pakistan captain Shoaib Malik said after the match that playing in Abu Dhabi is always tough. “We are trying to give all the players chances so selection committee and team management have a better picture in front of them. Every game is important. We have two more opportunities. If we win two games, we have something in our pocket,” he said.

Finch praised his team for consistency. “Any time you can beat India and Pakistan in their home conditions is good,” he said. Finch said he missed another hundred as he got a bit impatient.

With Wednesday’s victory, Australia have already sealed the series and they will now be looking to test their bench strength in the remaining matches. For Pakistan, criticism is mounting over the team selection just ahead of the World Cup. Amid mounting criticism, now Prime Minister Imran Khan has also made his views known to the PCB managers, showing his displeasure of the World Cup preparations.

The fourth match of the series will be played in Dubai tomorrow (Friday).