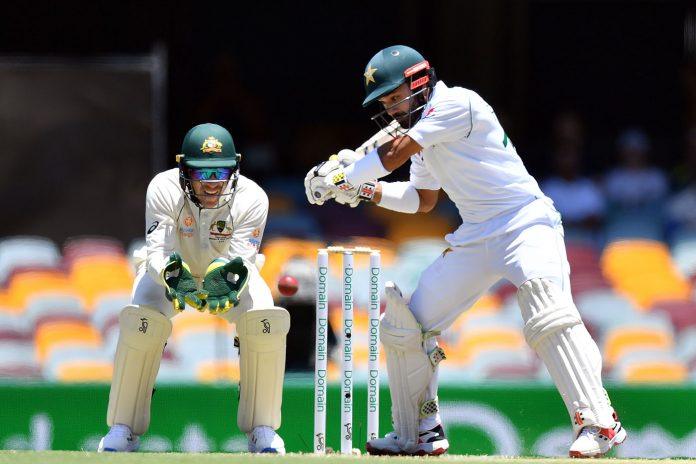 PESHAWAR: Australia defeated Pakistan in first match of the two-match Test series by an innings and five runs in Brisbane on Sunday.

Although Pakistan put some resistance in shape of century by Babar Azam (104) and 95 by Mohammad Rizwan to take the second inning score to 335, but they still fell short by five runs to plug the first inning deficit and make Australia bat again. Shan Masood and Yasir Shah also played well for 42 runs each while rest of batsmen flopped. Iftikhar Ahmed, who was included in the squad due to his good form in domestic circuit, failed to impress and he was out for a duck in the second innings after scoring seven in first innings. Asad Shafiq, who looked good in first innings with a score of 76, was also out for duck in second innings.

In the end, it was a comprehensive win for Australia who maintained their unbeaten record at the ground since 1988. Australia also extended winning streak in home Tests against Pakistan to 12.

Marnus Labuschagne was declared player of the match for his brilliant innings of 185.

“It’s good to have a winning contribution and help us win the Test match. Some of the technical changes that I have done since England have helped me so much,” he said at the presentation.

Pakistan Captain Azhar Ali said one bad session on the first day of the match dented Pakistan’s chances. He said Pakistan played well in start of the match, but lost the plot in a session and it was always difficult to come back.

“We didn’t build enough pressure during our bowling. Babar and Rizwan showed the way and also Shan played really well,” he said.

Azhar Ali admitted that it was tough to leave out Mohammad Abbas. “He’s always performed well for us. But these three who played had been bowling exceptionally well. I think Abbas is always there for us. We’ll look at the balance in the next couple of days,” he said, adding that Naseem Shah will be used wisely in future to ensure that he has a long career.

Australia are now leading the series 1-0. The next match of the series will start on Friday in Adelaide. It will be a day-night pink ball Test.