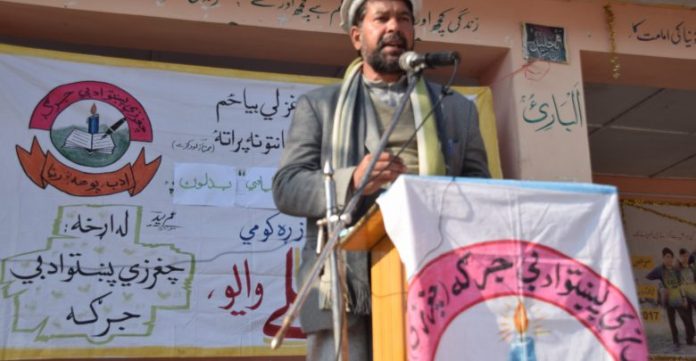 Rainfall is dwindling with each passing year
Our charming springs are vanishing
It’s now even a warm climate on the hilltop
Why nature wouldn’t be angry at us
When we mercilessly chopped down Chinar and Pines trees
(Pashto poet, Dawa Khan)

Beauty, purity and nature have always been the favourite topics of Pashto poets. They are more prone to get influenced by surroundings and nature. That is the reason that they’ve now realized and started discussing the deteriorating nature due to climate change. One of such piece poetry, as explained above, tells about the erratic climatic changes due to natural and manmade reasons such as deforestation.

It was the first ever such a poetry session organized at Chagharzai area, where besides the youth, the district administration also participated and appreciated the efforts. It is the part of the series of the poetry sessions on climate change initiated by a semi-government organization, National Rural Support Program (NRSP). An official of the NRSP Dawa Khan told the TNN that his organization is working on different schemes including the provisions of clean drinking water, pavements of streets, programs to create awareness about peaceful coexistence.

Khan said that they’ve received a good response that is why they have now started the poetry sessions to create awareness about the changing climate. “The climatic changes have destroyed our beautiful valley of Buner, but the people have no awareness about it,” said the Dawa Khan. Khan, who is also a poet, said that they have adopted the poetry as it has durable and far-reaching impacts on the public. He has made it a mission now to also arrange more poetry sessions in other parts of Buner.

Though Pakistan contributes less than 1 per cent of the world’s greenhouse gases blamed for causing global warming, yet it is the world’s most vulnerable victims of the growing consequences of climate change. The country is facing ever-rising temperature; drought and flooding that threaten health, agriculture and water supplies. Pakistan is among the top seven countries affected most by climate change, according to ‘Long term climate change index’. For the last ten year, some ten thousand people have died in Pakistan due to floods and other climate change-related tragedies. According to an estimate, it has incurred a loss of 400 Billion to Pakistan’s economy.

There are a number of reasons behind the destruction of Buner’s environment but the uncontrolled deforestation and explosives blasts for marble mining are the leading factors but no one has ever paid them any attention. Buner’s forest officer, Ahmad Jalil has accepted that there has been deforestation. “Some 25 per cent of the district was covered with forests, but now it has been turned into open grounds,” he revealed. He added that one of the reasons behind tree felling is the unavailability of the natural gas for domestic use in the Buner District due to which people burn trees a domestic fuel. 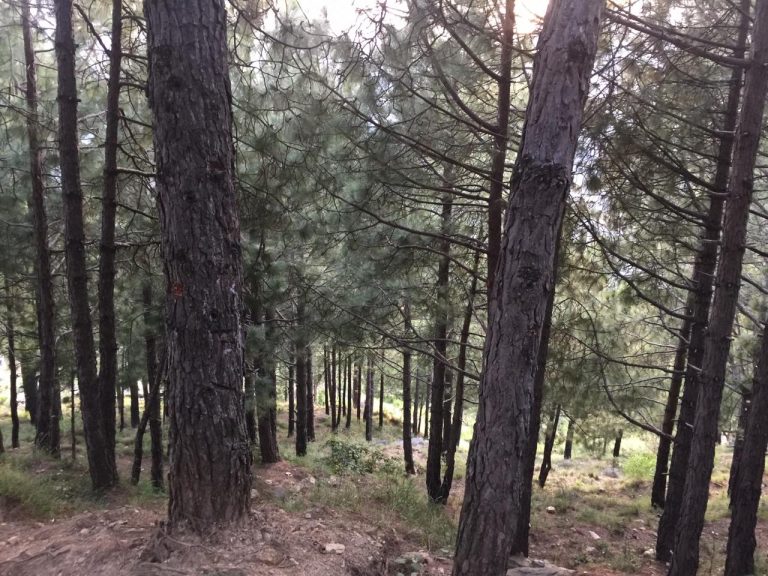 On the other hand, a resident of Pir Baba said it was the militancy, in 2009, which has affected forests more than anything else as there was no rule of law due to which the timber smugglers have got a free hand and mercilessly chopped down trees. He warned that a very powerful mafia is involved that is why tree felling and smuggling in still going on.

According to the district Marble association president, Murad Khan there are some 400 marble factories which have employed some 20,000 local people in term of direct and indirect jobs. These factories not only supply raw marble to local factories but also send 300 trucks on daily bases to other districts of the province.

However, it is said that the operation operations of these factories are based on decades-old techniques that are polluting the environment. “The operation of these factories is based on old fashioned techniques,” said Gul Naseeb, a local environmentalist to TNN. He said that they are still using the decades-old methods of cutting the rocks with blasts, generate a huge amount of pollution that creates a hazardous environment for human as well the wildlife. Most of the marble mines are situated in Bam Pokha mountain of Salazai Tehsil, where wildlife such as wild Monkey, jackal, Pheasant, partridge and other birds that were in abundance, a few years back, can rarely be found now.

Gul Naseeb revealed that no marble plant has installed any filters or treatment plants to treat the effluents inside the plants. Naseeb said that due to white powder generated from marble plants have also polluted the streams and due to which its water is of no use. “But the areas, where there is a lack of clean drinking water, people are forced to drink it, which has created a number diseases,” claimed Naseeb.

The poetry session was presided by a senior poet from Swat, Faiz Ali Faiz, who believes that poetry is the most potent instrument of creating awareness among the public. “The poetry session will encourage other poets and writers to write about this issue as it is affecting every aspact of our society,” said Faiz Ali Faiz to TNN. Faiz Ali has also recited his poetry on this occasion.

Our beloved land is like a bride, decorated with trees as her clothes.
Cutting down a tree is like tearing down every single thread of her clothes
I’ll not mind, if you destroy my home, but remember
Cutting a Chinaar tree is like chopping off my head.

Dr Inam Ullah Khan, a professor of agronomy at Agriculture University, Peshawar believes that due to climatic changes, there has been a huge reduction in underground water. “Due to deforestation, clouds cannot absorb water from the ground which has subjected the plain areas to flash floods,” said Dr Inam maintained. He added that for the last couple of years, rains have adopted very erratic pattern due to which a number of underground springs have vanished away. Dr Inam appreciated the organizers of the poetry sessions and said the people who have awareness about climate change are in a better position to adapt themselves accordingly and protect themselves from its negative impacts.

Naseeb Yaar Chargharzi, a poet, said that things in our surrounding, like natural streams, which have been romanticized by poets in their poetry. So, the climate change has also affected poets as the ‘Gudar’ in their poetry have now vanished away or got polluted as a result girls do not come with pitchers to fetch water from these streams.