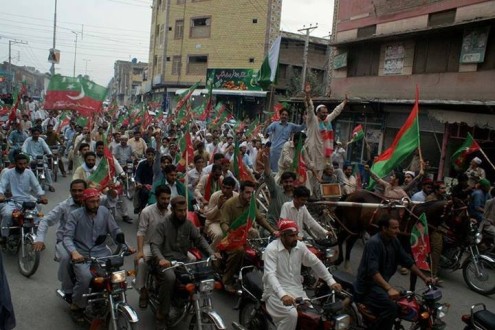 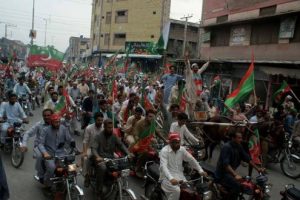 PESHAWAR, August 15: Pakistan Tehrik-e-Insaf activists had reached Gujranwala during their Azadi (independence) March while the activists of Pakistan Awami Tehrik were in Kharian, Punjab during their Inqilab (revolution) march till filing of this report.

PTI chief Mr Imran Khan says they will disclose all evidences about rigging in 2013 elections at evening in Islamabad today. He said the Punjab Police must release the PTI political activists.

The Pakistan Awami Tehrik, a party led by Dr Tahirul Qadri, has announced to join hands with the PTI chief during the protest movement against the incumbent government, led by Prime Minister Muhammad Nawaz Sharif.

PTI activists form Peshawar and other areas have already gathered at Abpara Chowk in the federal capital Islamabad.

The authorities have tightened security in the federal capital and they have also suspended cellular services in the area.

Leaders of both the parties have got permission from the authorities to to hold rallies at Zero Point in Islamabad.