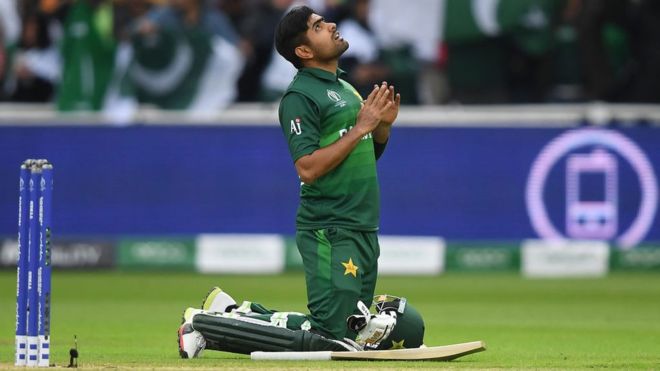 PESHAWAR: Pakistan T20 captain Babar Azam is continuing to break different records and now he has become first Pakistani and third batsman in the world to complete 1600 T20 runs in a calendar year.

Previously, only Chris Gayle from West Indies and India’s Virat Kohli had this record. Babar Azam looked in prolific form in 2019 and he has achieved many feats during the year.

In second T20 match against Australia, Babar Azam scored 50 runs, and became first Pakistani batsman to score 1600 runs in T20s in a calendar year. He is led by Chris Gayle and Virat Kohli now who have the record of scoring 1665 and 1614 runs in a calendar year, respectively. Babar Azam has still one more match to play against Australia on Friday in which he will have a chance to break Kohli’s and Gayle’s record and become the top scorer in the shortest format of the game in one year. With his current score of 1601, he will have to score minimum 14 runs to surpass Kohli and 65 runs to surpass Gayle.

He is getting wide acclaim and recognition as best choice for Pakistani captaincy in shortest format. However, some experts believed that he was rushed into captaincy. But with his performance in the first two matches, he has showed that captaincy is not affecting his brilliance in the batting.

Babar Azam has been given captaincy of Pakistan T20 team at a very difficult time when their top-ranking is on shaky ground and they are in Australia for a difficult series. Results of Pakistan during Australia visits in recent years are poor and the same is expected during the ongoing tour. However, Babar has conducted himself well in the start of his captaincy.