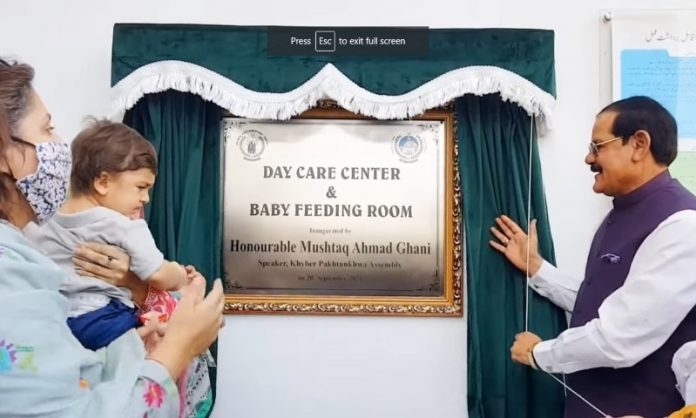 PESHAWAR: The Khyber Pakhtunkhwa Assembly has become the first legislature of Pakistan where baby feeding and day care centers have been inaugurated for women lawmakers.

Mushtaq Ghani said on the occasion that now the female lawmakers would not have to leave their infants at home for attending assembly sessions or committees meetings. He said that as per the vision of Prime Minister Imran Khan, the women were being empowered by ensuring their presence in the legislating process.

Members of Women Parliamentary Caucus Dr Sumaira Shams, Dr Asiya Asad, Madiha Nisar and others appreciated the initiative and said that KP Assembly also took leading role in every initiative including paperless assembly, setting up of separate chambers for opposition and parliamentary leaders, and now baby feeding and child care center. The women lawmakers also called for establishing child care centers at girls colleges and schools for female teachers and other staff.

A representative of KP Health Department said the provincial government has started work on Baby Friendly Hospital project initially in four major hospitals of Peshawar including Lady Reading Hospital, Khyber Teaching Hospital, Hayatabad Medical Complex, Movli Jee Hospital and one in District Headquarters Hospital Abbottabad wherein female doctors and other staff could feed their infants at the hospitals in privacy during the duty hours.

Meanwhile, the Health Department said in a briefing that various projects worth billions of rupees in primary, secondary and tertiary healthcare have been planned to further strengthen the health sector and provide quality medical treatment facilities to the people at their doorsteps. Steps were being taken under an integrated plan to ensure physical progress on those initiatives as per the given timelines so that their timely completion could be ensured and people could benefit them without any delay. It was further informed that in secondary healthcare sector, work was underway on the revamping 25 district headquarters hospitals.