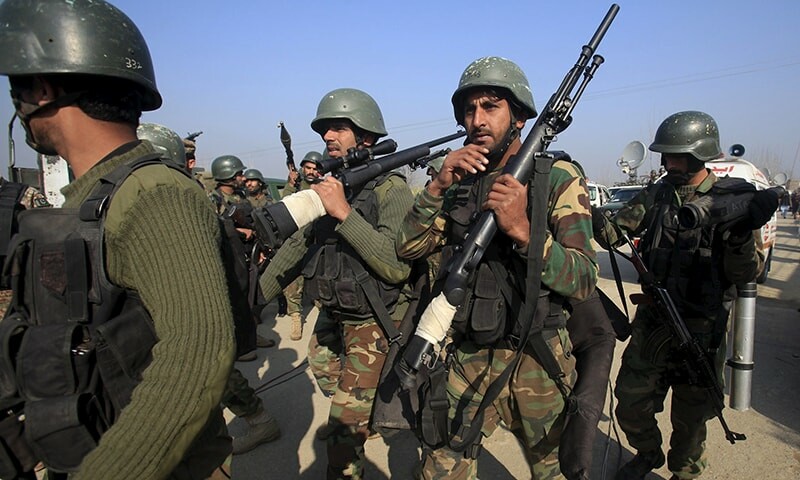 PESHAWAR, 20 January: Police and Pakistan Army Commandoes have cleared the Charsada Campus of the Bacha Khan University after killing all the four attackers in the cleanup operation on Wednesday afternoon, military spokesman Lt. Gen. Asim Salim Bajwa said in a news conference here.
The DG ISPR said that a total of 20 people including 18 students and two staff members embraced martyrdom. He said the attackers have been killed after they were restricted to a corner in the boys’ hostel of the university. The military personnel took at least six hours to eliminate the terrorist.
More than 50 persons have been injured in the attack who have been shifted to District Headquarters Hospital, Charsada while some critically injured have been brought to LRH, Peshawar.
According to local police most of the students were shot dead inside the hostel. The police also said huge sounds of blasts were also heard in the morning.
Some of the eyewitnesses recalled the attackers came from behind the university premises and they crossed the walls at about 9:00 am. They added that the militants opened indiscriminate firing on security guards and proceeded towards the administration block leaving the security guards injured.
Later, police contingents reached the sport and entered the university premises. They engaged the militants and in the mean time military personnel and army commandoes also reached from Peshawar and Mardan.
Chief of Army Staff General Raheel Sharif also visited Charsada to boost the morale of the soldiers.
Pakistan Tehreek-e-Insaf Chairman Imran Khan, Governor Khyber Pakhtunkhwa Sardar Mehtab Ahmad Khan, federal and provincial ministers and government high ups also visited the spot.
All the educational institutions across the province were closed down soon after the incident. Charsadda’s local administration announced to close all educational institutions in the district till 31st January.
Meanwhile, some media outlets reported that the banned Tehreek-e-Taliban Pakistan (Tariq Geedar group) has accepted responsibility of the attack. However, TPP spokesman Muhammad Khurasani condemned the attack saying that they have nothing to do with this.