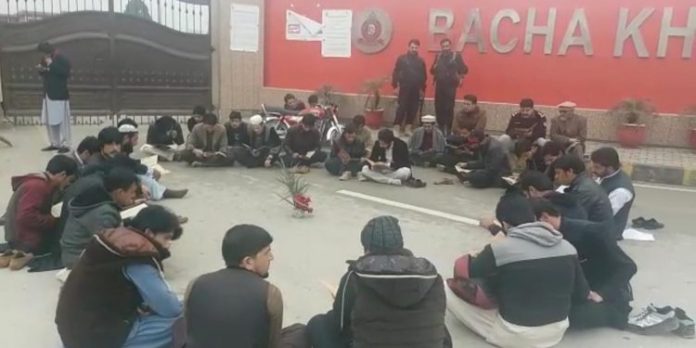 CHARSADDA: The students of Bacha Khan University Charsadda held Quran Khwani on the road outside the university on Sunday on the occasion of third anniversary of the terrorist attack on the university after they were not allowed by the administration to enter the campus.

On 20 January, 2016, four terrorists attacked Bacha Khan University at around 9:00am and killed 20 people, including 14 students and injured 22 others. The four terrorists were also killed in an operation by police and law enforcing agencies. Suicide jackets and other weapons were recovered from the attackers. Prompt action from the Pakistan Army and police ensured that at least 150 students were rescued safe and sound.  The facilitators of the terrorist attack were also arrested in subsequent intelligence based operations.

Meanwhile, the Awami National Party President Asfandyar Wali Khan said in a statement on the third anniversary of Bacha Khan University terrorist attack that the mindset of the terrorists should be defeated to eradicate terrorism. He said that though three years had passed after the heinous attack, justice could not be provided to the families of those killed in the attack on the university.

Asfandyar said that the terrorists had inflicted huge loss on the culture, economy and education of the Pakhtuns. He said that those, who laid down their lives, would always be remembered.