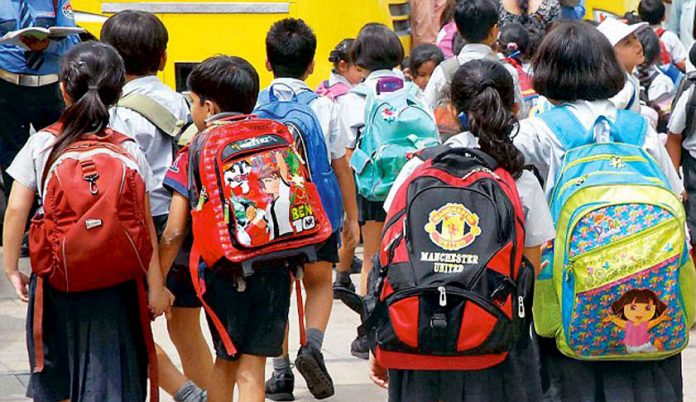 PESHAWAR: Voicing concern over heavy bags carried by school children, The Peshawar High Court (PHC) on Wednesday has given four months to the Khyber Pakhtunkhwa government to make a law to reduce the load of schools bags.

The court expressed dissatisfaction over the role of the provincial education department ins this regard as several orders were issued but they have failed to devise a mechanism on rationalizing the backpack loads.

The PHC in October 2018 has issued the first order in this case. During the Wednesday hearing, Chief Secretary, Secretary Education and senior officials of the education department appeared before the bench. The Chief Secretary, while replying the bench order to explain the progress, said that the KP government is making law in this regard but they need some more time.

The order int he case was issued by two-judge-bench headed by Justice Qaiser Rashid Khan while hearing a writ petition filed by lawyers, Moammar Jalal and Zahanat Ullah seeking courts directions for the government legislate or adopt a law to set the schoolbags weight limit as per the age of the children.

The lawyers stated in the petition that children had to carry 2kg to 15kg heavy bags which could cause various types of health issues as proved by scientific research. The lawyers while the citing the letter of the deputy medical superintendent of Abbasi Shaheed Hospital in Karachi, written a letter to some school principals stating that heavy bags could cause neck, back and shoulder pain in children.

The petitioner also produced a copy of the letter before the court along with various research studies to support his arguments. The lawyer requested the court to direct the government to ensure that the weight of schoolbags should not be more than 10 per cent of the child’s body weight.

He contended that it was unrealistic to expect students of kindergarten, first and second grades to carry heavy bags. The lawyer added India and Sri Lanka have formulated laws to set the weight limit of the schoolbags in 2006 and 2011 respectively. The lawyer said that Pakistan has not drafted any law and the children were forced to carry heavy bags.

The Chief Secretary said that they are now making law under which schools kids will be allowed to take books according to their weight. He added that such a law is already implemented in Sri Lanka. After the assurance of the Chief Secretary, the bench granted the government four months to legislate and adjourned the case till July 2.