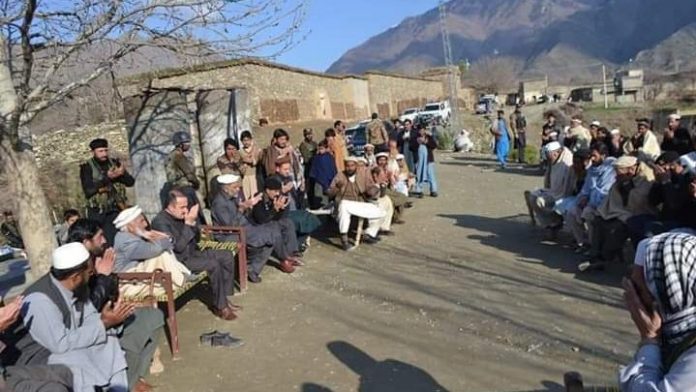 KHAR: Deputy Commissioner Bajaur tribal district Usman Mehsud on Saturday visited the residences of the labourers who were killed in a firing incident in Sindh and expressed condolence with the bereaved families.

The deputy commissioner offered Fateha for the departed souls and expressed sympathy with the bereaved families. Usman Mensud said the matter is not about one person or a family, but it is an issue about the whole tribe and the case of the incident will be taken up as such. He said the people of Bajaur will take up the case jointly as a first information report (FIR) of the incident has already been lodged. He said the culprits behind the killing of the poor labourers of Bajaur in Sindh will be arrested soon.

On Wednesday, two unidentified armed men on a motorcycle opened fire on a rickshaw in Larkana and killed three labourers from Bajaur. The slain labourers were identified as Raees Khan, Waheed Gul and Arab Gul. A CCTV footage of the incident in Larkana Bazaar has also surfaced in which the armed men can be seen opening fire on the labourers travelling in a rickshaw.

On the arrival of the bodies in Peshawar on Thursday, the Bajaur Students Organisation staged a protest demonstration outside the Peshawar Press Club. The protesting students condemned the killing of labourers from Bajaur and demanded arrest of the culprits behind the killings. They demanded Sindh Police to investigate the matter from all angles and trace the culprits behind this act.

The same day, the leadership of the Pakistan People’s Party (PPP), the ruling party in Sindh, assured that the culprits behind the Larkana incident will not be spared. The PPP central leader Farhatullah Babar, leader from Bajaur Akhunzada Chattan and Sindh sports minister Nasir Shah visited the houses of the bereaved families and assured them that they will be provided justice.

The PPP leaders offered Fateha for the departed souls and announced Rs0.5 million each for the families of the deceased labourers. They said the Sindh Police have initiated an inquiry into the tragic incident and so far four suspects have been arrested. They added that they will unmask the killers soon.