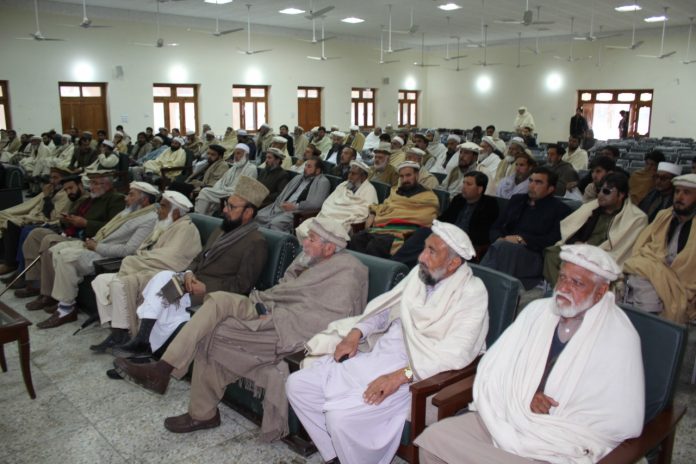 BAJAUR: The Bajaur grand Jirga on Monday rejected the deployment of the Police force in tribal districts and asked for policing authority to Levies force. The jirga also demanded the Khyber Pakhtunkhwa government set up regular courts for the district in Khar and vowed to boycott the courts set up in Timargara.

The jirga was called on the request of the founder of Bajaur Chamber of Commerce and Industry Haji Lali Shah, Pakhtun Yar and Chief of Raghgan Anwar Zeb Khan in which elders of Uthman Khel and Tarkhani tribes participated. The Political leadership of the district, Youth Jirga and members of civil Societies participated. While addressing the gathering the elders rejected the government to move to set up the regular court in Timergara. They said the deputy commissioner has already finalized arrangements for the courts and judges’ accommodate in Khar, therefore the courts set up at Khar. They announced a complete boycott of courts at Timergara.

The elders have asked the government that instead of deploying the police force in the tribal districts, it would be far better if Levies and Khasadar forces are given salaries and other privileges at par with the police force and empower them the policing powers.

The participants of the jirga said that the Bajaur is an underdevelopment district which should be given more funds and attention to bring it at par with other parts of the country. The jirga warned the government that if their demands were not fulfilled, they will be compelled to launch a full-fledged protest against the federal and provincial governments.