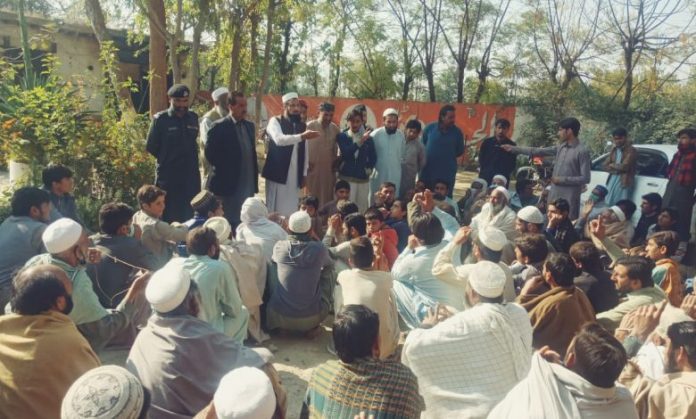 KHAR: The people of Bajaur tribal district on Friday staged protest demonstration against non-availability of flour.

The protesters also blocked the main road for some time, but opened it after assurance of the administration to resolve the issue.

A large number of people gathered outside Bajaur Flour Mill in Khar in the morning and blocked the road, saying that flour was not available to them. They were demanding that they must be given flour directly from the mill.

After receiving information, the deputy commissioner tasked Tehsildar Bakht Jehan to handle the issue and ensure law and order. The talks between the protesters and district administration succeeded on condition that flour must be given only to certified dealers in future. It was also demanded that direct supply of flour to ‘favourites’ from the flour mills must be stopped.

The protesters were assured that full support will be provided to them by the administration and their genuine concerns will be addressed. After assurances, the protesters ended their agitation.

Two days earlier, the tribal elders in Bajaur demanded payment of compensation for damages during the 2009 military operation against militants.

The demand was made during the oath-taking ceremony of new office-bearers of local trade association at the Civil Colony, Khar.

The political leaders, tribal elders and traders said about 5,000 shops and business outlets were damaged in Bajaur during the military action in 2009.

They said the federal government and local administration had made promises at that time to pay compensation to the affected traders so they could resume their businesses. The elders said the survey teams had registered over 5,000 shops and commercial units damaged or destroyed in Bajaur during the month-long assessment. They claimed that the affected traders were yet to be compensated for their losses. They demanded the federal and provincial governments to ensure early payment of compensation to the traders.

The assistant commissioner said the district administration was committed to promote business and trade activities in the region. He said the demand of the tribal elders and political parties will be conveyed to the concerned authorities.