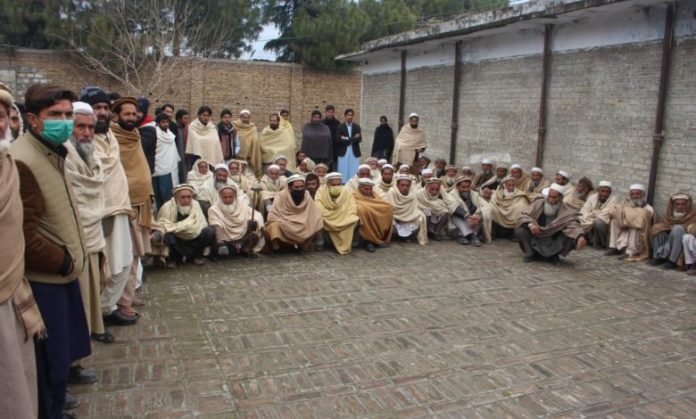 KHAR: The elders of 18 tribes of Ghundao area of Khar tehsil in Bajaur tribal district on Tuesday staged protest demonstration outside the office of patwari (revenue official) over the alleged lease of their mountain for minerals through backdoors without taking them into confidence.

The protesters made it clear that they would not accept lease of their mountain to outsiders. They said only that person must get lease who have the confidence of elders of 18 local tribes. They alleged that some elements want to occupy their mountain illegally, which they would not accept. They told the government, particularly the Minerals Department and other concerned authorities to desist from handing over the lease of their mountain to favourites. They said no lease would be acceptable to them which was given without taking the local elders into confidence.

The protesters said in case the government went ahead with handing over the lease to outsiders then the protests will intensify and the responsibility of any untoward consequences will rest with the government. They said they are presently protesting in Civil Colony Khar, the main town in Bajaur, but if their demands were not accepted then they would take to roads and block main highways. If the situation did not improve, then they said they would consider the options of protests in Peshawar and also in Islamabad.

According to annual report about performance of Police Department in Bajaur, the district got eight new police stations in 2020 in addition to two old police stations and also established an investigation wing.

The report released from the office of district police chief Shahzada Kaukab Farooq said Bajaur Police seized more weapons and drugs in the year 2020 as compared to 2019. It said 35 alleged smugglers were arrested and 41kg hashish and 51kg opium was seized during the year.

The report showed that 478 people were issued driving licences during 2020, resulting in the deposition of Rs7.6 million in the national exchequer. It said 50 people were arrested in robbery cases and 100 percent recovery was made from them. Also, 24 SMGs, 24 pistols, seven rifles, 194 dynamite, nine kg explosive material, hand grenades and other weapons and ammunition were recovered during the year.