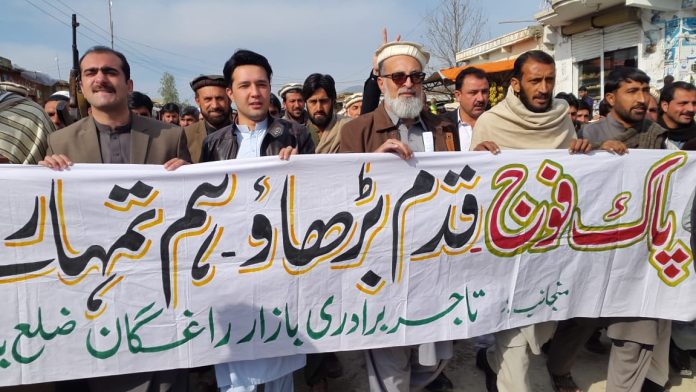 BAJAUR: People of Bajaur tribal district took out a procession on Thursday against the Indian aggression and vowed full support to the Pakistan Army for protection of the country.

Holding Pakistani flags and banners in their hands, residents, workers of various political parties, youths and social activists marched in Khar Bazaar and shouted slogans in support of the country’s armed forces.

Led by Jamiat Ulema-e-Islam- Fazal (JUI-F) local leader, Ahmad Zeb Khan and Pakistan Tehrik-e-Insaf (PTI) leader Sikandar Zeb Khan, the participants slammed the Indian government for unprovoked violation of the line of control (LoC). They announced to stand shoulder to shoulder with Pakistani security forces to protect the motherland against any aggression.

Holding national flags, banners and placards inscribed with slogans in support of security forces and against India, the protesters also chanted slogans against Indian Prime Minister Narendra Modi and Indian forces for violation the line of control by entering its war plans in Pakistani airspace.

The participants strongly condemned the Indian aggression and termed at a free plan conspiracy of India to further escalate the tension with Pakistan.  The assured the Pakistan armed forces that they will not be alone to face any aggression as the tribal people are always ready to take weapons for the safeguard of the country.

They also praised the Prime minister Imran Khan Wednesday address to the nation, saying the 6 million people of the tribal districts will not only stand shoulder to shoulder with Security forces but will stand in the front line against fighting India.