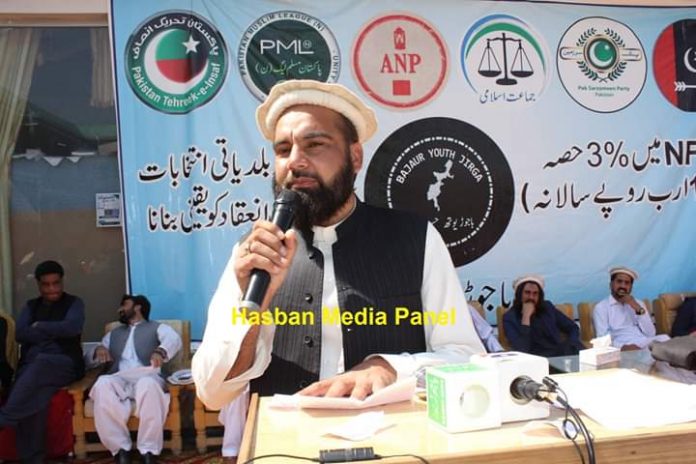 BAJAUR: The newly elected members of Bajaur Youth Jirga have taken the oath here at a ceremony at a local hotel on Friday.  The central leadership of the Jirga, Haji Abdul Qadir, Inayat Salarzai, Akbar Ali, Akhtar Gul, Nizam Uddin Khan, Irshad Safi and others notable were present on this occasion.

While praising the efforts of Bajaur Youth Jirga, the participants said that the Jirga has played an important role in raising the issues of tribal people. Especially, playing a role in the abolishment of Frontier Crime Regulation, and efforts for deciding the future of all the tribal people, who were deprived of the rights for centuries.

Chairman of the Jirga Maulana Sanaullah while addressing the gathering said that jirga is not against anyone but constituted to struggle for the rights of tribal districts. Sanaullah informed that the Jirga has the representation of all the political parties and will take everyone along as for as securing the rights of oppressed tribal people are concerned.

The chairman said that after the merger of tribal areas with Khyber-Pakhtunkhwa (KP), the people are still facing a number of problems which also include securing the tribal districts three per cent share in the National Finance Commission award as announced by the federal government at the time of the merger. He also added that they will struggle for the timely local government election and the enforcement of the system in the local bodies system in tribal districts.

On this occasion, special guest Ijaz Mohammad said that the tribal people have kept deprived of their basic right since the creation of Pakistan. He said that the tribal people, from the first day, are asking for the legal and constitutional rights but the successive government has refused to accept this rightful demand. Ijaz said that now the government has realised that they can longer keep them in dark as the youth has awakened now. That’s why he said, they have abolished they draconian laws of Frontier crime regulation and merged the tribal area with the KP.