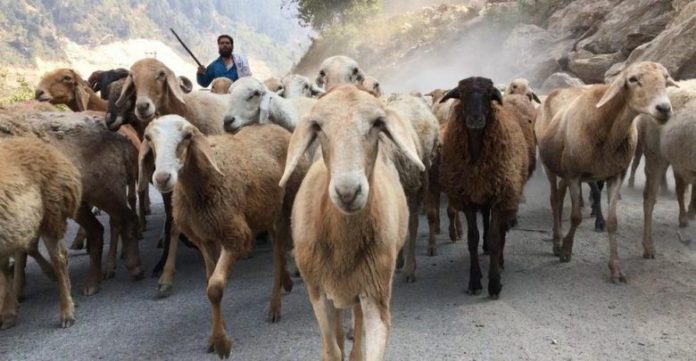 PESHAWAR: The ban on bringing sheep to Pakistan from Afghanistan via the route of Torkham border is still in place with few days remaining in Eidul Azha.

Only three weeks time is remaining in the arrival of Eidul Azha when the Faithful sacrifice animals as a religious duty, but the ban by the Customs officials on bringing sheep to Pakistan via Torkham border still persists. This has caused increased prices of sheep in Landikotal Bazaar, while the prices of mutton have also witnessed increase in the market due to short supply.

Local sources said the prices of average sheep start from Rs25,000 and then the limit keeps on increasing with increase in size of the sacrificial animal. The people of the area are facing difficulties due to increased prices of sheep.

The local butchers and cattle dealers are now bringing sheep from Peshawar and Nowshera after no supply from Afghanistan. The sheep are required in large number as there is a large number of buyers for Eidul Azha. The high demand and low supply means that the prices will increase further as the Eid gets closer.

The area people have called upon the government and security officials to take notice of the matter and end ban on bringing sheep to Pakistan via Torkham border to end their difficulties. They said sacrifice is a vital religious obligation for with the Faithful look forward the whole year. They said the prices of sacrificial animals are very high this year and people are finding it hard to buy animals of their choice.

The area elders said the pandemic situation has shattered the economy of the whole region and personal financial position of the citizens has also weakened. In such a situation, they said, the government is expected to facilitate the cattle dealers and traders to ensure that the prices are kept within the reach of the citizens. They feared that if the ban on bringing sheep from Afghanistan persisted then the prices will go further up and many people will not be able to buy sheep for Eidul Azha.

Attempts were made for contacting Customs officials to obtain their point of view on the issue, but they were not available for comment.