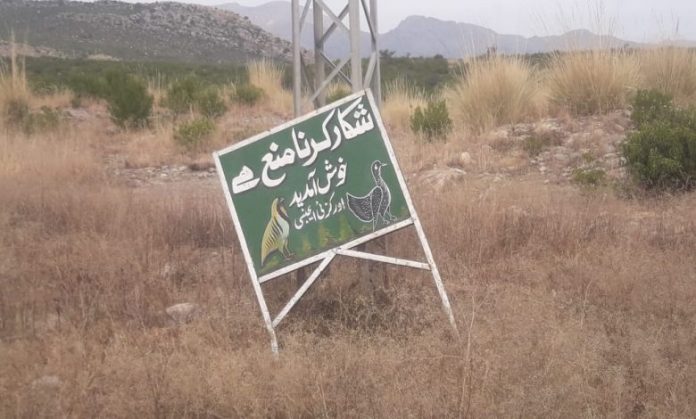 KALAYA: Deputy Commissioner Orakzai tribal district Muhammad Khalid has issued a notification that all kinds of hunting will remain banned in the district for three months.

However, it is interesting to note that two days after issuing the notification, people are seen coming to Chapar Mishti area of Central Orakzai and flouting the ban openly.

Muhammad Nisar, a local resident of Chapar Mishti, said while talking to TNN that high-level officers from Hangu, Kohat and Orakzai come for hunting to Chapar Mishti every week. He said the rare species of specific birds are endangered due to frequent hunting. He said officials also resort to aerial firing due to which people feel it unsafe to come out of houses and they also keep their children confined to homes. He said the whole area remains troubled when the officials come for hunting in the area.

Muhammad Sajid, another local resident, said the orders about ban on hunting are flouted openly, while no one takes notice. “We have also lodged complaints about this issue on the Citizen Portal, but no positive response was made,” he said.

Sajid said if the practice of ‘illegal’ hunting did not stop and people again came to the area for hunting, then the local people will have no other option, but to stage protest. He said no one listens to the demands of the area people so the last option is protest.

Also, the girls of Marghio Chan village in Orakzai tribal district are deprived of education despite existence of a school in the area.

Local people said a primary school building exists in Marghio Chan in Chapar Mishti, but girls can’t take any benefit from it.

Wali Jan, a local resident, told TNN that a primary school building was constructed in the village in 2010, but it remains non-functional even 10 years after its construction. He said the area elders have sent several requests to the Education Department in this regard, but the school could not be made functional and the area girls are deprived of education.

Malik Mehboob Khan, another local resident, said while talking to TNN that no basic education for girls even in this modern era is a source of grave concern for parents. He said most people in the area are poor and they struggle to arrange two-time meal for their children. In this situation, he said, it is impossible for the poor parents to arrange transport for their children to go to school in far off areas.

Malik Mehboob said it is beyond comprehension why the school remains non-functional despite availability of a proper building which can be utilised after necessary renovation.