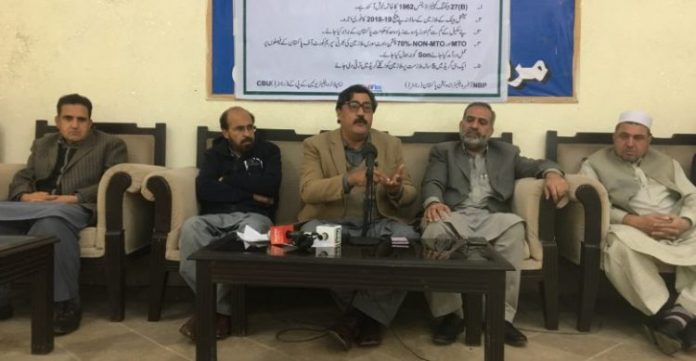 PESHAWAR: The employee’s associations of State Bank of Pakistan and the National Bank asked the federal government to abolish section 27B from Pakistan Banking companies ordinance 1962, otherwise they will start a countrywide protest.

While addressing a press conference at Mardan Press Club on Saturday, central president of the national bank of Pakistan employees association Noor Ullah and an officer of statement bank Muntazim Shah said that the employers are not able to raise voice for their rights due to section 27B of Pakistan banking companies ordinance.

“Under this section, we aren’t in a position to protest or raise voice for our own rights,” said Noor Ullah, while addressing the press conference. He added that the amendment was made to the Banking ordinance by the former prime minister Mian Nawaz Sharif to control banks in the country and pave way for the privatization of the national bank. He said that senator Raza Rabbani of Pakistan Peoples Party has also asked for the abolishment of this section from the ordinance.

The amendment to section (27B) of the Banking Companies Ordinance was added during Nawaz Sharif government is related to trade union activities. The National Assembly has passed the amendments.

“We’ve associated a lot of hopes with the government of Pakistan Tehrik-e-Insaf government,” said the president of the association. “The government has to accept our rightful demands otherwise we will start a countrywide protest.”