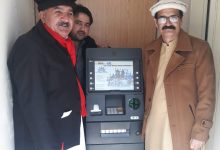 MIRANSHAH: The National Bank of Pakistan on Monday installed first-ever ATM in Miranshah sub division of North Waziristan to facilitate local costumers to withdraw cash from the local bank anytime without travelling to Bannu for money transaction.

The machine has been installed at Tehmeel Building in Miran Shah bazaar. Local residents expressed their jubilation over installation of the machine.

They said they will not go to Bannu or other cities for withdrawing cash from the bank and thanked NBP for the facility.

“We had to visit Bannu to withdraw cash from banks that would take several hours,” said Sajid Wazir. Officials at the bank said that ATMs would be installed at other cities of the district to facilitate locals.