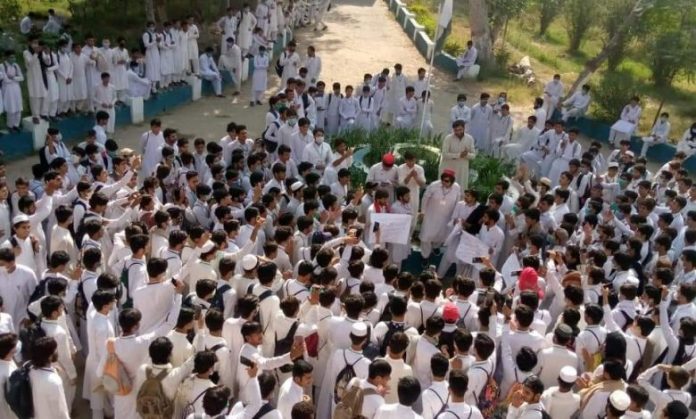 BANNU: The students of Government Post Graduate College Bannu associated with Pakhtun Students Federation on Friday staged protest for increase in seats of BS and against demand of fee of lockdown period by the college administration.

The students gathered at the main corridor of the college and chanted slogans against the college administration. Student leaders Salman Shah, Asfandyar Khan, Zubair Khan, Fakhar Khan and others said only 40 students from every department have been given admission in the four-year BS programme, but the rest have been left out. They said about 70 percent students remained deprived of admission to the first semester in BS and their academic year was wasted. They said this problem can be overcome by increasing the BS seats in the college.

The student leaders said they held a meeting with Khyber Pakhtunkhwa Transport Minister Malik Shah Muhammad Khan recently, who had promised to resolve the transport issue, but he did nothing practically. They said the issue of transport for the college is pending for the last eight months, while the administration has turned a blind eye towards the situation.

The protesting students said the newly-built hostel building in Bannu College has been converted into a department. They said the college students who come from other areas live in private hostels due to lack of hostel facility at their own college. They demanded the administration to arrange hostel facility and cafeteria for the students.

The students warned that they will take to roads if their demands were not accepted by the college administration.