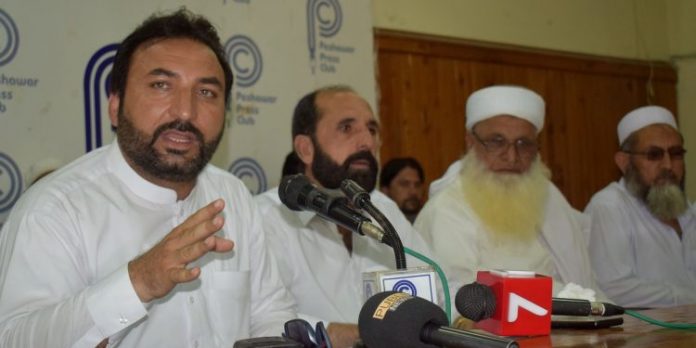 PESHAWAR: The people of Bara sub-division of Khyber tribal district have asked the government to demolish the Shahkas wall in Hayatabad Phase-7 and open the gate by tomorrow (Monday).

They warned that they will demolish the wall and open the gate if the government failed to do so. Independent candidate from PK-109 constituency of Khyber tribal district Haji Saeedullah Afridi said at a press conference along with other area notables at Peshawar Press Club that the Peshawar Development Authority (PDA) has constructed a wall in Shahkas, Hayatabad Phase-7 area of Peshawar due to which the link between Bara and Peshawar has been cut off. He said people of Bara are facing a lot of difficulties in reaching Peshawar due to the hindrance of what he termed ’12-kilometre wall of hate’ in Shahkas.

Saeedullah Afridi said a large number of people from Bara had to travel to Hayatabad Phase-7 on daily basis. He said hundreds of students from Bara travel to Hayatabad as their educational institutions are situated there. He said patients from Khyber tribal district also visit Peshawar daily for better treatment facilities at hospitals. He alleged that the rulers have adopted a discriminatory attitude against the tribal people and erected a ‘wall of hate’ to prevent their easy entry to Peshawar.

The independent candidate said he has sent several applications to Deputy Commissioner Khyber and Director General Peshawar Development Authority to open the gate in the Shahkas wall, but no action was taken over it. He claimed that Al-Haaj Karawan led by former Member National Assembly Shah Jee Gul Afridi, candidate of the Pakistan People’s Party (PPP), traders of tribal districts and other tribes are with him on this issue.

Saeedullah Afridi said the people of Bara have also set up a protest camp in Shahkas. He said blockage of Pak-Afghan Highway is also included in their protest plan to pursue their genuine demands. He repeated his warning that the people of Bara will have to open the gate and demolish the wall if the authorities failed to do so. He said that in such a scenario, the responsibility of damages will rest with the government.