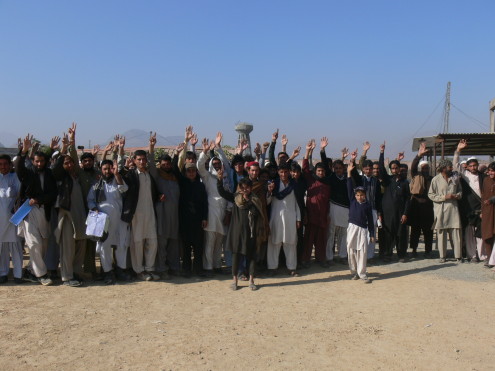 BARA, December 6: Tribesmen from Bara tehsil of Khyber Agency have demanded the government transfer staff of the National Database and Registration Authority offices in Shakas Levies Centre and  the Khasadar deployed at its gates because they said the officials were mistreating tribal folks.

Visitors of the NADRA offices at the Levies Centre told TNN that the residents of Bara had been displaced and they facing a host of problems, but on the other hand the officials of NADRA and the Khasadar personnel deployed at the gate did not let them avail facilities without greasing their palms.

They said the officials misbehaved women visitors at the centre. They alleged they were charged 500 rupees in excess of normal fee.

“We have got our forms signed by all relevant people, such as tehsildar and Maliks [tribal chieftains] but  still our forms are not being submitted. They have closed their doors and not allowing us to enter the offices,” stated one of the visitors.

Another tribesman said, “We arrived here yesterday and spent a night here but still not being let enter the NADRA offices, while those paying money are being given entry. I am here to submit forms of two women family members and have completed all necessary formalities but I am being insulted by officials here.”

When contacted, officials of NADRA offices in the area refused to comment on the issue.