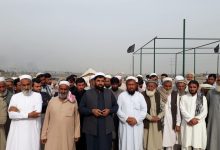 The tribesmen had boycotted polio vaccination drives in protest over a dispute over land for Shahid Afridi Sports Complex and adopted that the administration had taken one-sided decision regarding the land.

The decision to end the boycott was taken during a Jirga where elders of Akakhel tribe welcomed the decision of the district administration to hold an inquiry in allocation of land for the complex.

They said that there was no reason left to continue the boycott and asked the government to send polio teams to vaccinate their children.