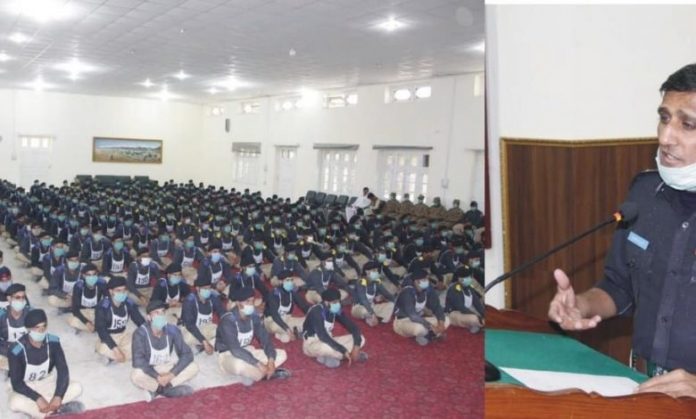 Sanaullah Abbasi said on the occasion that the training on modern lines is being provided to 400 former Levies and Khassadar personnel in which emphasis is being made on their physical fitness and making them aware of established police laws, basic human rights, and increasing their professional capabilities.

On the occasion, Colonel Javed Abbasi briefed the KP police chief about different aspects of the training. The IGP was told that the training of former Levies and Khassadar personnel is continuing smoothly in a befitting manner and all the personnel are showing great interest in it. The participants of the training showed their skills to the IGP who was impressed by their progress. The display included the use of modern weapons, steps to protect lives and properties of public, security to VIPs and rescue operations of kidnapped persons.

Meanwhile, Sanaullah Abbasi attended a police Darbar at Governor’s Cottage in Parachinar. The KP police chief thanked the Pakistan Army for providing best training to the newly integrated Levies and Khassadar personnel. He said modern training and increasing the professional acumen is vital for the newly integrated personnel. He said this is a great opportunity for the law enforcers of merged tribal districts to enhance their capabilities and gain professionally. He said this training will prove a milestone in professional career of the law enforcers and it will also help the people of merged districts in larger scenario in having access to their basic rights.

The KP police chief said all the Levies and Khassadars will have incentives equal to the KP Police including equal Shohada Package. He said all the personnel will have equal opportunities of promotion. He said the process of provision of vehicles, weapons and communication equipment to police of merged districts is continuing with a rapid pace.