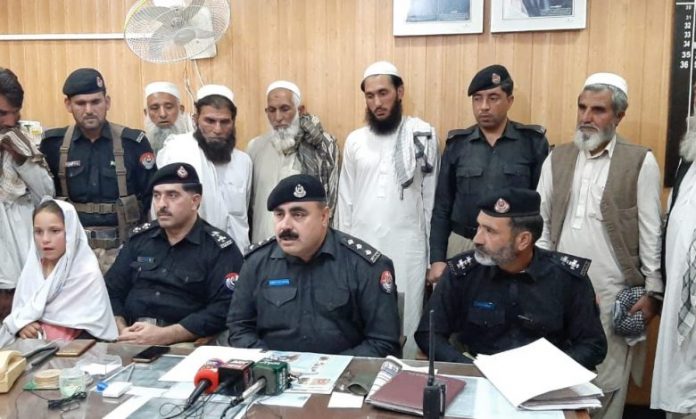 UPPER DIR: Police in Upper Dir have foiled a bid of punishing an eight-year-old girl for the sin of her brother.

TNN correspondent reported that a bid of giving an eight-year-old girl as Swara (compensation to settle dispute) for forgiving the sin of her brother in Chargom area of Upper Dir has been foiled. Local police took action after receiving information that the little girl was being handed over to the rival family as bride and Nikah had also been held.

Police have arrested 12 members of the Jirga which had announced the verdict of giving the little girl as Swara. The person who administered the Nikah has also been arrested. A case has been lodged against the Jirga members and further investigation is underway.

Deputy Superintendent of Police (DSP) Amjid Ali Khan and Station House Officer (SHO) Muhammad Hussain Ahmed said action is being taken against the accused according to law. Sources said the Jirga gave the girl as Swara to settle an honour-related dispute. The brother of the little girl, Safiullah, was accused of having illicit relations with the rival family and he was receiving death threats. Finally, it was decided by the Jirga that the Safiullah’s sister will be given to the rival family as Swara and the dispute will come to an end.

Last year, police in Charsadda rescued an 11-year-old girl who was given as Swara in Khanmai area.

TNN correspondent reported that Charsadda Police received information that Zahidullah and daughter of Abdullah were accused of having illicit relations after which the matter was decided through a local Jirga. The Jirga decided that Abdullah’s daughter will be given in marriage to Zahidullah, while an 11-year-old daughter of Gul Afzal will be given to Rehman, a son of Abdullah, as Swara to settle the dispute between the two families.

Police took notice of the incident and formed a team and accused were arrested. Hence, the life of a little girl was saved with timely action by the law enforcers.