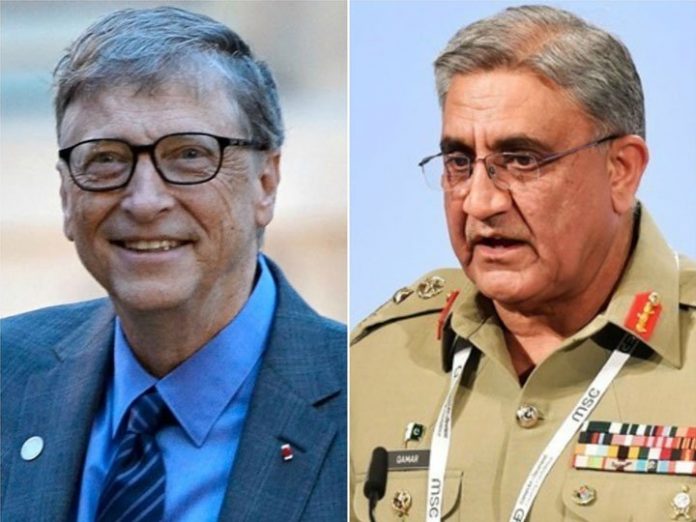 According to the Inter-Services Public Relations (ISPR), Bill Gates expressed his appreciation for Pakistan during his telephonic talk with Chief of Army Staff (COAS) General Qamar Javed Bajwa about Pakistan’s response to COVID-19 pandemic and resumption of polio immunisation campaign. Bill Gates was also appreciative for role of the Pakistan Army in supporting the national polio drive and ensuring proper reach and coverage for polio workers.

General Qamar Javed Bajwa said Pakistan got success in the fight against coronavirus due to a unanimous national response executed through the mechanism of National Command and Operation Center (NCOC), which allowed optimisation of resources.

The two discussed the importance of conducting the polio campaign effectively during the pandemic.

About Pakistan’s efforts against polio, the COAS said it was a national cause and national effort for a polio free Pakistan. He said credit goes to grassroots workers including mobile teams, law enforcement agencies and healthcare representatives for making immunisation campaigns successful.

Bill Gates reiterated The Gates Foundation’s ongoing commitment to fight pandemics around the world and to support Pakistan in its goals of ending polio and improving health for every child.

Meanwhile, coronavirus situation is improving in Pakistan with the total number of recoveries reaching 265,624.

According to the latest official data, there are now only 16,261 active cases in the country and the rest have recovered. During the last 24 hours, 747 people were tested positive and nine lost their lives. As many as 23,722 tests were carried out during this period.

There is a lot of improvement in the coronavirus situation in Pakistan recently and most of sectors have already been reopened except for schools and wedding halls, which are also expected to be reopened on September 15. The government is repeatedly advising the people not to let their guard down and continue to observe precautionary measures to avoid the disease from striking back as is the case in some other countries.