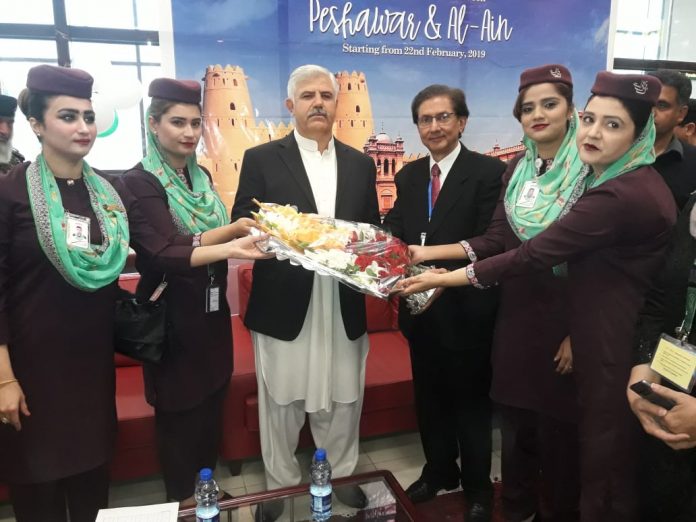 Chief Minister Mehmood Khan, who inaugurated the night flight operation, hoped that it will be helpful to boost trade and commercial activities in the provincial capital. The CM bade farewell to the 143 passengers on board PK255 from BKIA and claimed that the resumption of night flights is an obvious change and a sign of restoration of durable peace in Peshawar.

“The previous rulers did nothing for the poor and when the constitutional institutions start asking them for their wrongs these corrupt started propagating against these institutions,” He maintained in his tirade against rival parties at the inaugural ceremony.

The Chief Minister said that Prime minister is vociferously persuading the friendly countries for the employment of our people. It was his firm advocacy, said the CM that friendly countries started giving financial relief to Pakistan in difficult situation. Khan also said the federal and provincial governments were aware of the hardships of faced Pakistanis living abroad.

Mahmood Khan said that because of terrorism, the Peshawar Airport has stopped flights but now it restarted flights as peace has returned to the province and the country. He gave credit to the PIA for launching its flights from Peshawar. The traders of the province have been demanding the government to re-launch night flights and also increase the number of flights from the provincial capital.

The Chief Minister said that Imran Khan was committed to the change of system and would fulfil all the promises made with the people. “The previous rulers did everything against the people but PTI would ensure bringing a change and prosperity for the people,” He claimed. “When NAB apprehended the looters and plunders, the corrupt raised fingers at the NAB.”