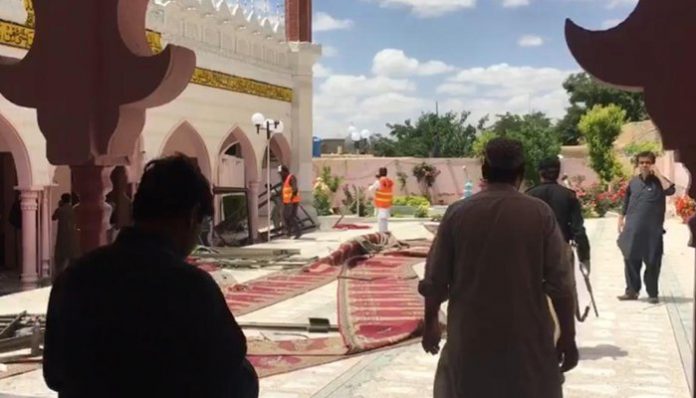 PESHAWAR: At least two people lost their lives and 15 others sustained injuries in a blast in a mosque in Quetta during Friday prayer.

The blast happened at Rehmania mosque in Pashtoonabad area when the faithful were performing Friday prayer at 1:15pm. The mosque administration said that about 40 people were present in the mosque when the blast happened.

The mosque administration said the blast occurred at 1:15pm and that there were approximately 30 to 40 people in the mosque for Friday prayers. The rescue teams and security personnel immediately reached the site of the blast. The security personnel cordoned off the area, while the rescuers shifted the injured people to Civil Hospital Quetta.

The nature of the blast is not known yet and no banned outfit has claimed responsibility of the blast so far.

The death toll might increase as some of the injured were stated to be in critical condition. Local sources said the windowpanes of nearby buildings were broken due to the impact of the blast.

In their separate statements, they expressed grief over the deaths and multiple injuries caused by the blast. They said those who make innocent people the target of terrorism in this blessed month and on this blessed day deserve a severe punishment.

They prayed that Almighty Allah rest the departed soul in eternal peace and grant courage to the bereaved families to bear the loss with equanimity.

The Balochistan chief minister also directed the authorities to enhance security for the mosques.

The blast in Quetta mosque happened two weeks after a terrorist attack on the Pearl Continental Hotel in Gwadar in which five people lost their lives.

On April 14, at least 20 people lost their lives and many others were injured in a blast targeting Hazara community in Quetta.