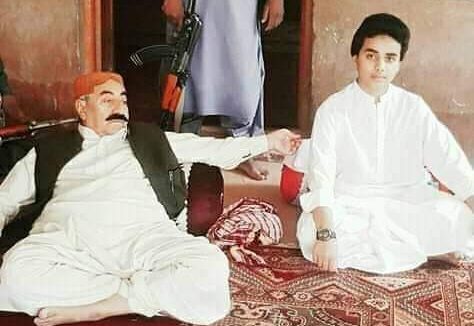 PESHAWAR: Central leader of the Balochistan National Party (BNP-Mengal) Amanullah Zehri along with three others was killed in a firing incident in Khuzdar district of Balochistan on Friday night.

Levies sources said unknown armed men opened fire on the convoy of Amanullah Zehri in Zehri tehsil of Khuzdar. Sources said Amanullah, his grandson and two other persons died in the firing incident. The assailants escaped from the scene after the incident. Sources said the armed men were already waiting for the arrival of convoy and they ambushed it.

The bodies were shifted to a nearby hospital. Khuzdar Deputy Commissioner Muhammad Ilyas Kabzai also reached the site of the incident.

The BNP-Mengal chief Nawab Akhtar Mengal announced the news of Amanullah Zehri on Twitter and called it a dark day for the party and people of Balochistan.

“Another dark day for BNP and the people of Balochistan. This loss has deprived us all. I’m lost of words today. Devastated to learn that Shaheed Amanullah Zehri with his friends and innocent grandson have been brutally killed in the middle of the night. May Allah have mercy,” he said on Twitter.

The attack on the BNP-Mengal leader happened few hours after a loud explosion rocked a seminary in Kuchlak area on the outskirts of Quetta in which at least five people lost their lives and over 20 others were injured.

Police said the blast took place after Friday prayers. The bodies and the injured were shifted to Civil Hospital Quetta. The prayer leader of the seminary was also killed in the blast.

Inspector General Police (IGP) Balochistan Abdul Razzaq Cheema said a time bomb was fixed under the chair of the prayer leader. No group has claimed responsibility for the blast.

It was fourth explosion in Quetta during the last four weeks.

People of the capital city have expressed concern over law and order situation and demanded the authorities concerned to take action against the miscreants.