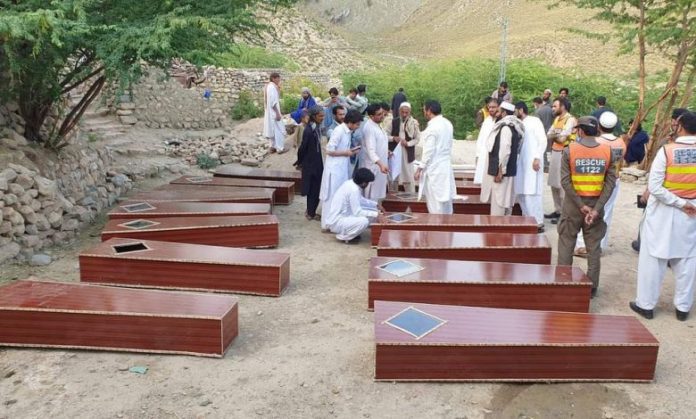 PESHAWAR: The bodies of 16 coalmine workers from Shangla, who were kidnapped in 2011, have been found in a mass grave in Jowaki area of Kohat.

Kohat police says the 16 bodies have been recovered from a mass grave in Jowaki, a mountainous region of Babukhel that borders the city of Nowshera. The bodies were lifted from the mass grave and an investigation into the matter has been launched.

The district administration and a team from the Shangla Coal Mines Workers Welfare Association (SCMWA) were present on site during the extraction of bodies from the mass grave.

Sarfaraz Khan, a spokesman for SCMWA, said the bodies of the coalminers will be shifted to Shangla where a joint funeral will be offered. Some local politicians also arrived at the site of the mass grave during extraction of the bodies to express solidarity with the victims.

Abid Yar, an office-holder of SCMWA, told TNN that the coalmine workers work under hazardous conditions and they also face threat to life. He said no official data is available about the number of coalmine workers dead or rendered disabled during accidents. He said the organization’s own data shows that 174 miners died in different accidents in 2018, 194 died in 2019 and 204 in 2020. Now during three months of 2021, around 50 miners have lost their lives in different incidents and many others were rendered disabled.

KP Minister for Labour Shaukat Yousafzai had promised registration of coalminers with Labour Department and online registration system was also initiated, but labourers are facing difficulties in it.

SCMWA spokesman Sarfaraz Khan told TNN that labourers have no access to internet for registration with Labour Department and they don’t have awareness in this regard. He said the registration process must be made easier and teams of Labour Department must be sent to coalmines to register the workers on the spot.

Media reports said that in in 2011, many labourers from Dara Adamkhel were kidnapped, murdered and their bodies dumped in mountains. Subsequently, in March 2012, more than 50 bodies were found buried in mass graves in Jowaki. Among these, some were bodies of the Shangla coalminers.