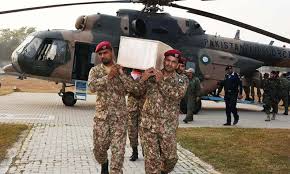 PESHAWAR, 17 December: The identification process of all the 47 victims of plane crash in Havelian has been completed.

After completion of identification, 11 bodies of the victims will be handed over to their families today (Saturday) in Chitral. A spokesman for Pakistan Institute of Medical Sciences (PIMS) Hospital in Islamabad said six of the 11 bodies in Chitral belong to same family. The spokesman said only one girl has been left in the ill-fated family.