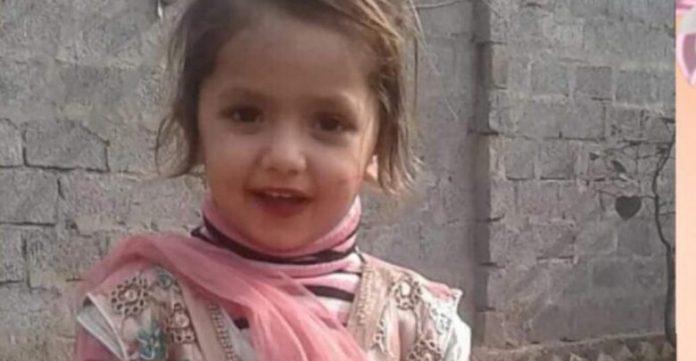 MARDAN: The body of a four-year-old girl, who went missing a day ahead of Eidul Azha in Janbaz Naray area of Mardan, was found on Thursday.

TNN correspondent reported that four-year-old Iqra, daughter of Rehmatullah, resident of Janbaz Naray village, went missing on Sunday evening after she went out of her house to buy hina for Eidul Azha. The family members of the girl tried to find her, but failed to locate her after extensive efforts and ultimately they filed a report about the incident at Saddar Police Station.

The body of the missing girl was found from a sugarcane field near her house on Thursday evening. The body was sent to Mardan Medical Complex (MMC) for post mortem.

Residents of the area said they had searched fields in the village on the same day when the girl went missing. They said the field in which the body has been found was watered on that day, therefore, they did not search that field, and the body has been recovered from the same field.

Sources in the hospital said the samples from the body of the girl have been sent to laboratory for tests. The DPO Mardan said the real situation will be known only after arrival of laboratory report. It is feared that the girl might have been sexually abused and then killed. People of the area have demanded the law enforcement agencies to arrest the culprits involved in the murder and award exemplary punishment to them.

The father of the victim girl is a labourer in Saudi Arabia.

Last week, a teenaged girl was killed by unknown persons in Garhi Kapura area of Mardan.

Police said the 12-year-old girl was killed near Battagram canal and her body was found hanging in a deserted place near her house.

The family members of the girl said she went missing after which they started search for her. They said after hectic search someone told them that the body of the girl was hanging from a tree. They suddenly went there and recovered the body.