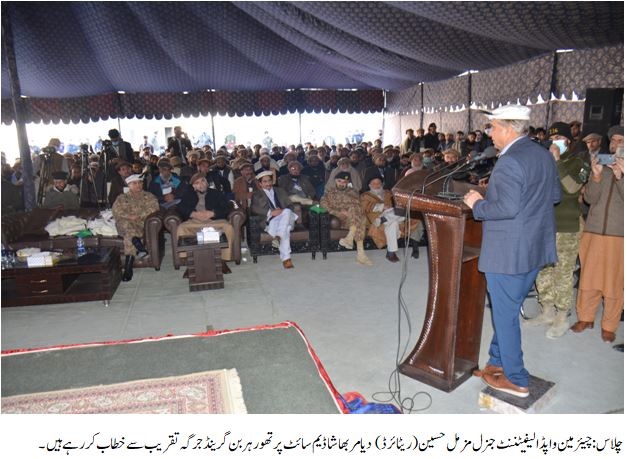 A grand jirga has settled the longstanding boundary dispute between the Thor tribe of Gilgit Baltistan district and Harban tribe of Khyber Pakhtunkhwa Upper Kohistan district.

District administrations of Diamer and Upper Kohistan had constituted the jirga to resolve the dispute which was affecting the construction of Dimaer-Basha Dam.

At this occasion, Rs 400 million cheques were also distributed among the affectees for land acquisition.

The spokesperson said that the settlement will also help in demarcation of border between the KP and GB.

A 26 members’ jirga from the Thor and Harban tribes was constituted in 2019. The jirga comprised 13 members from each side, including religious scholars and tribal elders. Over a period of two years, the jirga met on several occasion to reach a settlement.

At this occasion, chairman WAPDA, FCNA and tribal elders distributed cheques worth Rs 400 million for land acquisition. Besides compensation cheques were also distributed among the affectees of 2014 bloody clashes between both sides. Several people were killed and properties were damaged during clashes.

In his speech, General Hussain thanked the grand jirga for resolving the dispute between both tribes. He also appreciated the efforts of civilian administration of KP and GB and land acquisition and settlement department of the WAPDA.

Prime Minister Imran Khan also took to the Twitter to welcome the settlement. “Historic development and good news on Diamer Bhasha Dam. He said that grand jirga of Diamer and Upper Kohistan elders have settled decade old Thor and Harban tribes’ dispute. “This will allow smooth & timely completion of Dam as well as pave way for settlement of boundary dispute between GB and KP,” he added.

The multi-billion dollars Diamer Basha Dam is being constructed on River Indus and expected to be completed in 2028-29. The dam will have storage capacity of 8.1 MAF to irrigate 1.23 million acres of additional land. Besides, it will also produce 4,500 megawatts of electricity.