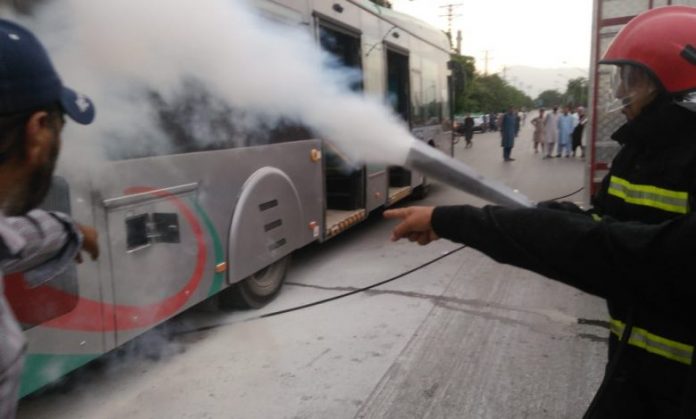 PESHAWAR: Another bus of the Bus Rapid Transit (BRT) caught fire on Wednesday after which the Khyber Pakhtunkhwa government announced to suspend the service temporarily.

The bus caught fire on a feeder route of Hayatabad near Sunday Bazaar. No injuries were reported in the incident as the rescue personnel immediately reached the scene and doused the fire.

Since the inauguration of the mega project on August 13, 15 buses of BRT have gone out of order in less than a month. Ten buses stopped while travelling on BRT routes, while five went out of order as fire erupted in them.

Special Assistant to Chief Minister for Information Kamran Bangash confirmed that the bus service had been suspended temporarily. He said the service will remain suspended till the submission of the report by the probe team of Chinese experts. He said the technical team from China would investigate all aspects. However, he said, the route had no problem but added that this aspect may be investigated as well. Mr Bangash insisted that all the drivers were well trained and professional.

Muhammad Umair, spokesman of Tans-Peshawar, the company that runs the BRT service, said that the service has been temporarily suspended to identify the cause of technical fault in buses.

The spokesman said the Chinese manufacturers have also advised to suspend the operations temporarily. He said the operations will resume after proper investigation and addressing the problem.

Another team of the bus manufacturers has also arrived in Peshawar to assist the previous team which is already probing the issue. He said the reasons behind the previous fire incidents also could not be ascertained that is why a Chinese teams have been called for investigation. He said the bus service will resume after investigation into the fire incidents and checking of all buses.