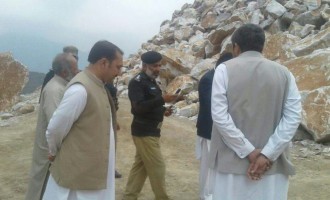 BUNER: The district government on Wednesday sealed a marble mine after  two persons were killed and another injured in landsliding caused by blasting in one of the mines on Tuesday last.

A statement issued here from Deputy Commissioner office said that none of marble mine would be allowed to operate without adopting safety measures.

It warned that strict action would be taken against owner of any mine where labourers were found working without wearing safety gears and taking precautionary measures.

The DC also directed compensation to heirs of the deceased and said that blasting at marble mines in the district would be banned.

At least two persons were killed and another injured due to landslide over a truck in Baam Pokha area of Buner due to blasting.