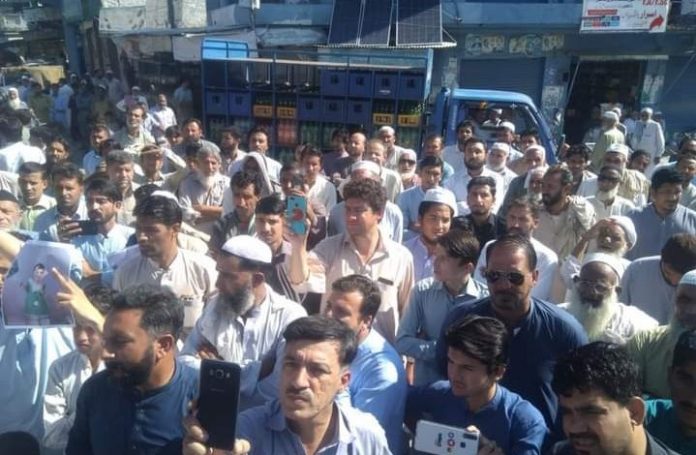 BUNER: The people of Buner on Monday held a protest demonstration at Jawar Chowk against the murder of a five-year-old girl from Salarzai area after sexual abuse in Karachi.

The protesters kept the Mingora-Pir Baba and Daggar-Mingora road blocked for one hour to record their protest. People belonging to different walks of life participated in the protest.

The local elders at the protest strongly condemned the murder of little girl Marwa from Buner in Karachi after sexual abuse. They said the brutal murderers have crossed all the limits and Salarzai tribesmen will never forgive them and would never rest till they are punished.

The protesters demanded the federal and Sindh governments to arrest the culprit(s) involved in the murder and hang them publicly. They said they will hold a massive protest in Peshawar if the culprits were not arrested within a week.

On September 06, the body of five-year-old Marwa, hailing from Buner, was found in Isa Nagri area of Karachi. The local residents said the body was stuffed in a bag. They said it appears that the body was set on fire as it was mutilated badly. The parents of the victim girl had shifted to Karachi few years ago. After the girl went missing, the parents lodged a first information report (FIR) in the PIB Police Station.

Meanwhile, doctors have confirmed that Marwa was killed after sexual abuse.

Medical Legal Officer of Jinnah Hospital in Karachi said the girl was hit in the head with a heavy item after sexual abuse. The samples of the body have been taken for further investigation.

Police have arrested 11 suspects from the place where the body of the girl was found. Two suspects have already been arrested. The DNA tests of all the suspects will be taken to trace the culprits.

Police say investigation of the case is underway and it is hoped that the culprits will be traced soon.

Earlier, the Khyber Pakhtunkhwa Assembly Monday adopted a resolution condemning the murder of a little girl from Buner after sexual abuse in Karachi and demanded arrest of the culprits and severe punishments for them.