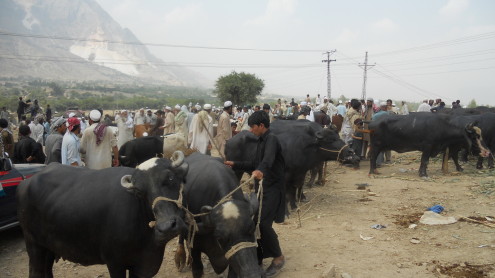 JAMRUD: With Eidul Azha round the corner, prices of sacrificial animals have gone up at in Jamrud cattle market making it difficult for buyers to fulfill the sacred obligations.

Compared to last year, this year buyers are paying at least Rs15,000 to Rs20,000 more on purchase of an average bull. Though, export of sacrificial animals has been banned by the provincial government still prices have increased.

“A sacrificial animal that was sold at Rs30,000 last year is being sold at Rs45,000 this year,” said Noor Jamal, a resident of Jamrud.

On the other hand, people in this business said that transporters Afghanistan and Punjab have been charging double fare besides paying Rs2200 to Rs3000 tax on Torkham border.

They also said that cost of animal fodder has sky-rocketed this year due to which the overall retail price of sacrificial animals increased.

They said that they hardly earn Rs1500 to Rs2000 per sacrificial animal and asked the government to reduce the tax and transportation fare. In Jamrud Cattle Market, price of a sheep ranges from Rs15,000 to Rs50,000.

The high prices has been cause of concerns for buyers as well as for the people in the business.