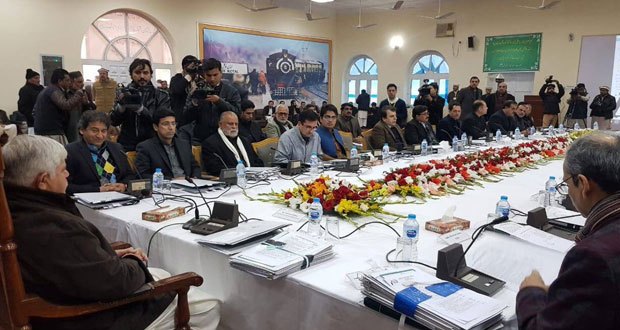 LANDI KOTAL: The Khyber Pakhtunkhwa government exempted the tribal districts from all kind of provincial taxes. The decision was taken in first ever cabinet meeting in the district Khyber. It was decided that taxes in vogue in the erstwhile FATA will remain intact and no new tax will be imposed on tribal people.

Held at Jirga hall on Thursday, the meeting was chaired by the Chief Minister and the entire cabinet ministers, advisers and provincial government’s officials participated. The officials said that the purpose of the meeting in Landi Kotal is to give a sense of ownership to tribal people in the national development and ending their long sense of deprivation.

Briefing newsmen about the decisions taken in the meeting, Information Minister, Shaukat Yousafzai said that the Safari Railway track from Peshawar to Landikotal will be restored to revive the glorious Safari Train service. The cabinet also decided to start Safari Bus service in the tribal districts, he added.

The cabinet decided to take up the matter regarding payment of Net Hydel Profit on the small hydel dams to the districts where it has been constructed.  He continued that scores of small dams are constructed in Shangla and Kohistan districts, but these are not being paid Net Hydel Profits. The cabinet approved PC 1 for construction of Tehsil buildings in 16 Tehsils of merged areas with the objective of extending municipal services there.

The cabinet also directs for induction of 17000 employees in various vacant positions in the merged areas on merit basis. Similarly, approval was also given to imparting of training to 2000 tribal students.

The Finance Minister, Taimur Saleem Jhagra told cabinet that a task force will be raised for effective guarding of Torkham border. The provincial government has requested the federal government for payment of Rs. 10 billion for the merged tribal districts for the infrastructure development.