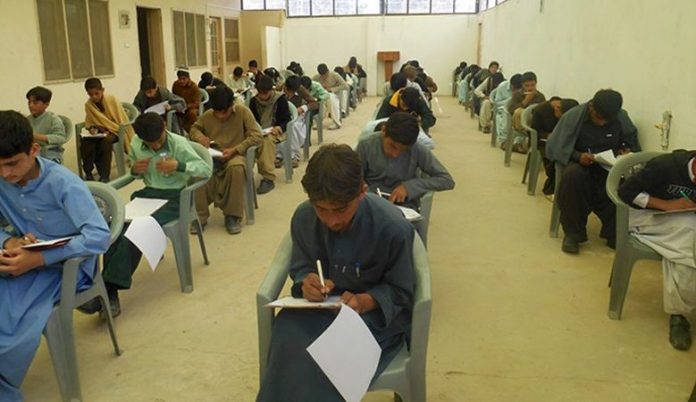 PESHAWAR: “I was so certain that this time I would pass the test and my years of hard work would pay off. But what happened instead wasn’t what I had expected and all my hard work went in vain. I’ve gotten disheartened now and don’t see any point in giving the PST test through NTS again”.

Asma Gul from Peshawar is one of the tens of thousands candidates who participated in the PST test via NTS on 7th February 2021 having dreams of her bright future. However, after the test cancellation, she was deeply disappointed.

This test was conducted by National Testing Service (NTS) for recruiting primary school teachers (PST) but unfortunately, the paper got leaked. Moreover, the leaked paper got viral on social media before the paper was even conducted, resulting in outrage from the candidates and as a result, fingers were pointed at the recruitment process.

Later on, an inquiry team was set up by Khyber Pakhtunkhwa Chief Minister Mahmood Khan to investigate the whole issue. After investigation, the provincial cabinet approved the cancellation of the test. This was announced at a press conference by KP Minister for Elementary and Secondary Education Shahram Tarakai.

While talking to TNN, a mother of two, Asma told that along with managing household responsibilities she also works at a private media organisation. And she finds it difficult to spare time for the preparation of the cancelled test again alongside her household and job responsibilities.

According to Asma, the cancellation of the NTS test is not a permanent solution to this problem. “Who is constantly leaking out the paper? The real culprits should be presented before the public. Already millions of degree holders are workless. The only way is to find out a decent government job for ourselves in the future but there too the situation is not promising because our rights are being violated.”

According to sources, around 9 lac people had applied for the PST test, out of which three and a half lac candidates had attempted the paper. The provincial cabinet has ordered to conduct the test again at its own expense but the candidates don’t seem to be happy about this either.

Riaz Bukhari, a candidate from Peshawar, says instead of cancelling the test the provincial government should arrest the people who leaked out the paper and bring them before the nation. “We submit our fee with great difficulty and often we don’t even have the fare to go to the examination hall. Kindly either have mercy on us or abolish NTS completely and bring forward some other means for conducting fair tests,” he said.

On the other hand, at a time when thousands of candidates like Asma and Izhar seem unhappy with the government’s decision, some other candidates still have some hope and are ready to take the test again.

Hailing from Takht Sher Bhai Garh, another candidate named Sadia, is teaching at a private school for the last eight years and she is trying to get a job in a government school in her area and for that purpose, she has conducted NTS test several times.

Sadia told TNN that it’s not the first time that the test conducted through NTS got cancelled. She had also given a test before which was cancelled later on due to the same issue. Nevertheless, she is still ready to attempt the PST test once again.

It is to be noted that after the paper of the NTS was leaked on 7th February 2021, the KP government had announced the suspension of the PST examination and ordered a complete inquiry into the matter. And it was being said that legal action will be taken against those who were found guilty of any irregularities in the test. Moreover, the paper will also get cancelled.

In this regard, a notification from the Chief Minister Secretariat was issued on 9th February, saying that merit and transparency will get top priority in the recruitment of government employees and no compromise will be made on that.

According to a notification, reports of leaked NTS papers were received from Dir, Buner, Dera Ismail Khan, Karak, Shangla and Mardan. After that, the test results were postponed. And action will be taken against the people involved in the light of the inquiry report.

Sources further shared that complaints about screening tests were received by the education department in the past as well. Hence guidelines had also been issued to the headmasters of the schools in order to ensure their presence in the examination hall.