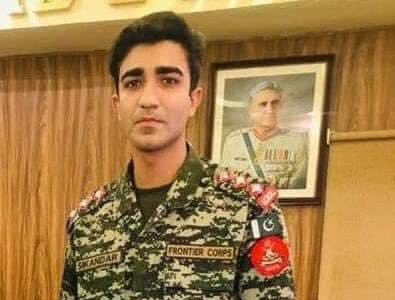 PESHAWAR: A captain of the Pakistan Army was martyred, while two security personnel were injured in a clash with terrorists in Dabara area of Tank district on Wednesday.

Sources said Captain Sikandar was martyred in the clash, while the injured soldiers were identified as Lance Naik Anwar and Salman.

The sources said a commander of the banned Tehreek-e-Taliban Pakistan (TTP) Khawaza alias Sherullah was also killed in the clash. The body of the slain terrorist commander was shifted to a local hospital.

The clash in Tank district of Khyber Pakhtunkhwa happened a day after 10 terrorists, including four commanders, were killed by the security forces during an intelligence-based operation (IBO) in South Waziristan tribal district.

According to the Inter-Services Public Relation (ISPR), the operation was conducted on a reported presence of a concentration of terrorists. The security forces cordoned off the hideout and recovered weapons and a large stash of ammunition.

The ISPR said the slain terrorists were actively involved in planting improvised explosive devices (IEDs), conducting fire raids, and target killing of innocent civilians. These terrorists were planning to conduct more acts of terrorism inside South Waziristan. The ISPR said the Pakistan Army is determined to root out the menace of terrorism from the country at all costs.

On September 20, a commander of the banned Tehreek-e-Taliban Pakistan (TTP) was killed in an IBO in Mir Ali tehsil in North Waziristan. The slain terrorist Safiullah was reportedly involved in the killing of four women of a non-governmental organisation (NGO) in February 2021 and the target killing of Frontier Works Organisation (FWO) engineers in November 2020. He was also involved in planning and execution of IED attacks on security forces, extortion and kidnapping for ransom.